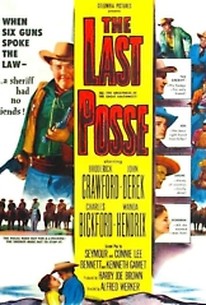 After his Oscar win for All the King's Men, Broderick Crawford found himself working out his Columbia contract in a string of rapidly deteriorating films. The Last Posse was a middling western, the sort that the studio sent out as bottom-of-bill attractions for their prestige pictures. The posse of the title, headed by sheriff Crawford, is a group of ostensibly honest townsfolk. When they catch up with the desperadoes who robbed a wealthy cattle baron, some of the posse members are overcome by greed and plot to keep the stolen loot for themselves. Once Crawford is wounded in a shootout, avarice prevails. There are no real winners at the end, as the remaining posse members straggle back to town, their heads hung in shame. ~ Hal Erickson, Rovi

Will Wright
as Todd Mitchell

James Bell
as Will Romer

Monte Blue
as Kane
View All

Critic Reviews for The Last Posse

Westerns predominate in Hollywood's current output. This specimen is no High Noon or Shane, but some of its characterizations are unexpectedly sharp and honest, especially that of Crawford as a liquor-loving marshal...

There are no featured reviews for The Last Posse at this time.