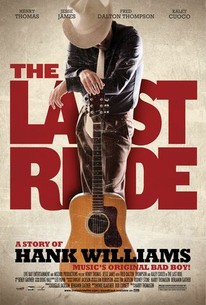 After a meteoric rise to radio super-stardom in the late 1940's, Hank Williams, who called himself Luke the Drifter, had made a train wreck of his life. At the end of 1952, Hank Williams gathered what was left of his physical strength to make things right and began the long road back. On his way to a couple of New Year's shows in West Virginia and Ohio, he hired a local kid who didn't even own a radio, much less know who this legend was, to drive him to the gigs from Montgomery, AL. Hank Williams never got there. Inspired by the mysterious final days of Hank Williams' life, The Last Ride is the story of that final drive through the bleak Appalachian countryside of 1950's America. -- (C) Category One

Gary Newton
as Usher
View All

News & Interviews for The Last Ride

View All The Last Ride News

Critic Reviews for The Last Ride

The 1952 El Dorado represents Williams' success as a songwriter and country singer, but it also serves as his refuge from an increasingly chaotic life.

The Last Ride squanders its potential, much like its tragic subject.

Alas, "The Last Ride" doesn't deliver much insight into Williams or the lifestyle that killed him.

The Last Ride doesn't give us a complete picture of Hank Williams. But it does ably illustrate the final days of his life.

James does a fine job of portraying a naïve youth whose eyes slowly open to glimpse both the pleasures and the pain of living.

Henry Thomas gives his best performance in quite some time.

A romantic "what-if" version of the story, interesting only as a cultural artifact...dramatically inert

Henry Thomas shows he beat the child star jinx with his heartfelt portrayal of Hank Williams.

... an evocation of an era, of a lost-highway America evidenced today only in the roadside ruins of old service stations and downtown hotels, of a South before it was swamped by leveling and homogenizing waves of globalization and television.

Bearing all the hallmarks of a small-budget labor of love, The Last Ride is a leisurely paced but modestly engaging road trip that gets considerable mileage from the byplay between its two lead characters.

Audience Reviews for The Last Ride

Not exactly how I envisioned Hank to be but I certainly did not know him. This movie needed Hank Williams music in it to make it complete - and you know he crashed many of bars and took over the stage, he loved to show off, he loved the limelight, he had to be seen and recognised, it it would have been great to have heard Hank tell his story to the young driver, to see flashbacks that lead up to where they were at that point - because to be honest parts of this movie were kind of flat, a little back story would have been a real attention grabber... where was that in this movie? I would give it an 4 1/2- only because I think Hank have more charm & character than they had the actor express. I know this was just his 'last ride' but Hank had a real temper he also was smooth as silk with the ladies and he was one rowdy guy always looking for a fight - I just think maybe they could have let Jessie James add a lil more oomph into this character... this is definitely worth the watch. Kaley Cuoco was awesome in the movie, even though she had a small part. 4 1/2 stars 7-1013