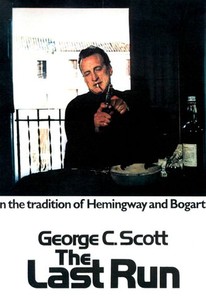 George C. Scott stars in The Last Run as an aging mob driver hoping to make one last big haul and retire. Harry Garmes (Scott) is persuaded by his old cronies to drive escaped criminal Paul Ricard (Tony Musante) and his girlfriend, Claudio Schemer (Trish VanDevere), across Spain to safety. Garmes has premonitions throughout the flight of his own demise, but his fate will not be known until the end of his journey. John Huston was supposed to direct, but was replaced after a series of confrontations with Richard Fleischer.The cast includes Scott's then-wife, Colleen Dewhurst, alongside his wife-to-be, Trish VanDevere.

Critic Reviews for The Last Run

In any guise, George C. Scott is worth watching, though his performance here seems haunted by the same tedious resignation that atrophies the script.

The movie forgets what kinds of characters it's developed and gives us an ending we can't accept.

The scenery is breathtaking and the mountain road chases better than average.

There are no featured reviews for The Last Run at this time.