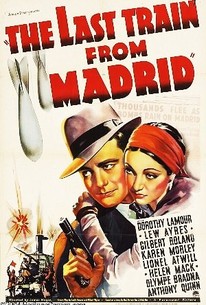 The Last Train from Madrid Photos

Set during the terrible Spanish Civil War, this film avoids political commentary in favor of objectively centering on the plight and personal lives of refugees preparing to board a train that will take them far away from the bloody horrors of war-besieged Loyalist-controlled Madrid. Once safely on the train, the film presents snippets from their lives in the same manner as was done on Grand Hotel (1932). Among the refugees are a political fugitive, his flirtatious ex-girl friend, a hooker, a baroness, a world-weary newspaper reporter and the orphan who follows him. In charge of making sure the train safely reaches its destination is a single guard.

Harry Worth
as Gomez

Charles B. Middleton
as Warden

Cecil B. DeMille
as Man Coming from Bungalow

Stanley Fields
as Avila
View All

Critic Reviews for The Last Train from Madrid

A tawdry storyline that reads like a train wreck.

There are no featured reviews for The Last Train from Madrid at this time.

The Last Train from Madrid Quotes