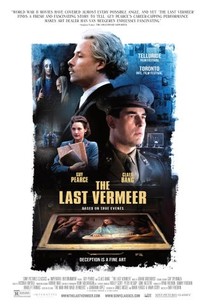 While Joseph Piller (Claes Bang), a Dutch Jew, was fighting in the Resistance during the Second World War, the witty, debonair aesthete, Han van Meegeren (Guy Pearce) was hosting hedonistic soirées and selling Dutch art treasures to Hermann Goring and other top Nazis. Following the war, Piller becomes an investigator assigned the task of identifying and redistributing stolen art, resulting in the flamboyant van Meegeren being accused of collaboration -- a crime punishable by death. But, despite mounting evidence, Piller, with the aid of his assistant (Vicky Krieps), becomes increasingly convinced of Han's innocence and finds himself in the unlikely position of fighting to save his life.

Steve Such
as Cootje's Husband

Nick Vorsselman
as Soldier on Truck

Mark Winstanley
as The Traitor

Critic Reviews for The Last Vermeer

It will fascinate art lovers as well as 20th century history buffs.

Pearce gives one of the best performances of his career, investing Van Meegeren with a quicksilver charm and the kind of confidence that can be acquired only through a lifetime of subterfuge.

Based on a true story, but they take tremendous liberties there...a film full of grandstanding moments that are entirely made up, but I enjoyed it as that, rather than it trying to be anything else...

By far the most enjoyable aspect of the film is Pearce's overripe performances as van Meegeren, with an assist from Olivia Grant, acidly sensual as the painter's model/mistress.

An entertaining if uneven mixture of post-World War II fact and fiction.

It's an inherently fascinating and wild true story, [but] I just thought this was occasionally dull.

While it takes a while to some into focus, 'The Last Vermeer' can modestly boast a good Guy Pearce performance and a satisfyingly rousing courtroom climax.

Like Vermeer's paintings, the movie's colorful premise gains depth by exploring the blacks, whites, and most importantly, grays of life.

Sinks into a well-populated list of other dramas about art and the war far too easily and generically than a feature about this specific tale should.

A handsome, deliberately paced historical drama given life by a flamboyant performance from Guy Pearce.

A bit too twisty for its own good.

Everything original is buried under an inexplicable effort to make this story something that we have already seen. [Full review in Spanish]

There are no featured reviews for The Last Vermeer at this time.