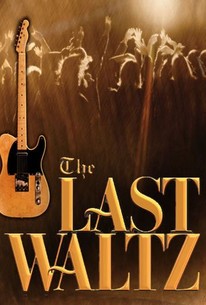 Critics Consensus: Among one of, if not the best rock movie ever made, The Last Waltz is a revealing, electrifying view of the classic band at their height.

Critics Consensus: Among one of, if not the best rock movie ever made, The Last Waltz is a revealing, electrifying view of the classic band at their height.

Critic Consensus: Among one of, if not the best rock movie ever made, The Last Waltz is a revealing, electrifying view of the classic band at their height.

Bob Dylan
as Himself

Neil Young
as Himself

Joni Mitchell
as Herself

The Staple Singers
as Themselves

Neil Diamond
as Himself

Eric Clapton
as Himself

Ronnie Hawkins
as Himself

Ringo Starr
as Himself

Muddy Waters
as Himself

The Band
as Themselves

Emmylou Harris
as Herself

Van Morrison
as Himself

Ronnie Wood
as Himself

Paul Butterfield
as Himself

Dr. John
as Himself

Pops Staples
as Himself

News & Interviews for The Last Waltz

View All The Last Waltz News

Critic Reviews for The Last Waltz

At its best the style of The Last Waltz, at once kaleidoscopic and concentrated, discursive and fixated, distils more about its subject and its times (and about its maker and his obsessions) than the impressionism of cinema verite.

Simply one of the best rock docs ever, born of equal parts thunder and fatigue.

The Band's music has such intrinsic strength and resilience that it can't help but break through those self-imposed barriers and set itself and the audience free.

It's arguably the most beautiful of rock movies, while the musical highlights - 'The Weight' with the Staples Singers, Van Morrison's firebolt 'Caravan', every Levon Helm vocal - still astound.

There is a dazzling array of talent on display here, and the film surely has its memorable moments. But it articulates so little of the end-of-an-era feeling it hints at.

Emotional, soulful and one of the five best rock-docs ever made.

Martin Scorsese has filmed the end of a dream with nostalgia, affection, intelligence, and strength. [Full Review in Spanish]

Essential viewing for budding musicians and misty-eyed folks who hark back to a golden era when these rock gods ruled the earth.

It might be the best concert film of all time.

This 1978 labour of love, one of the most immaculately filmed rock concerts, preserves for posterity the final appearance of the Band, the great group led by Robbie Robertson that had been on the road (often with Bob Dylan) for 16 years.

Audience Reviews for The Last Waltz

Just saw this on the big screen for the first time in 2013. What an amazing lot of talent on one stage at one time. I saw it as a series at a local art house and there was a film professor from Local U pontificating before the film about how this movie made him hate Martin Scorsese--said he was a big egomaniac--so I was interested to see what that was all about and all I can say is I'm glad I didn't become a film major if all film profs are such jackasses. Scorsese was basically invisible--he was just the guy the Band members were talking to, in fact he seemed a little nervous--the cinematography was beautiful and the music was out of this world. I had never heard Joni Mitchell sing Coyote. Wow. It was a real story, too, about why the band was breaking up after 16 years on the road. Probably the best documentary about a band I've seen.

Thursday November 25th, 1976: Thanksgiving Day. On that night, one of the most momentous events in music history took place. For on that night, The Band decided to call it a day as a group and have a farewell concert at the Winterland in San Francisco to mark the occasion. They brought along with them some of their friends, influences, and collaborators. Martin Scorsese was brought along to document the occasion. This film, released two years later is the result. Well, not to diminish the impact, but it's only part of the result. All in all, the full uncut concert was five hours long. Man, I'd kill to see all of it. Too bad I'll probably never get the chance. Anyway, let's get on with it shall we. The guests musicians who all show up for varying lengths to jam include, among others: Joni Mitchell, Bob Dylan, Neil Diamond, Van Morrison, Dr. John, Neil Young, and Eric Clapton. Even poets like Michael McClure and Lawrence Ferlinghetti show up to perform. I think it's pretty fair and obvious to say that obviously Robbie and Co. were familiar with the phrase "if you're gonna go out, go out with a bang". Not only is this an epic and brilliant concert, it's just a wonderful celebration of an interesting period of music during an even more interesting time for both music and society. The mid 70s were a curious time, and this film really helps capture the essence. All of these people onstage love msuic, but you can just tell they're all weary and burnt out, and in need of revitilization. If you only jsut listen to this great music, you can't tell it, but seeing it being performed, you can just tell that there's a lot of pain, frustration, and bitterness going on.Interspersed between the footage are typical interview/documentary type footage with help provide further insight into the msuic, the people, and the times, and it too, like the stage stuff, though great, is very bittersweet. You'd think that because I am a huge fan of Scorsese, a fan of 60s and 70s rock music (thus a fan of most people that are featured here), and have both a scholarly and general interest in the 70s that I probably would have already seen this movie lke 100 times by now. Surprisingly no. For whatever reason, I didn't get around to this until now. Obviously I'm happy I finally did it, but still, I can't help but feel like I'm less complete for having waited so long. Don't be like me and make that mistake. Go out and see this film as soon as you can. It's got great music, is fascinating to watch, and is shot and directed superbly. It easily earns all the acclaim it gets about being one of (if not the) finest concert film ever made.

A great document of a great band.

Martin Scorsese directs this part interview, part live show with members of ?The Band? on their last gig together after 18 years on the road. An impressive musical line up offers performances from Bob Dylan, Eric Clapton, Neil Young, Van Morrison etc etc. For those who enjoy this era of music and the atmosphere of live singers who are some of the best musicians of our time, this footage really is a treat to see. The quality of performances are exceptional and I?ve no doubt that this will be one to play over and over.