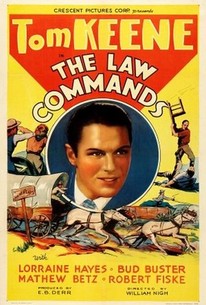 Directed competently by the veteran William Nigh, this ultra low-budget Western from diminutive Crescent Pictures Corp. features something as unusual as a hero who is also a medical doctor. The Homestead Act of 1862 not yet enforced in Johnson County, Iowa, the local homesteaders find themselves terrorized by a gang night riders. Town leader Jed Johnson (Carl Stockdale, whose property is under threat from the land grabbers, is inclined to answer force with force but is persuaded by Dr. Keith Kenton (Tom Keene) to instead found a Land Claim Association and try the usurpers in court. Jed is murdered by Frago (Matthew Betz), and his children, Mary Lee (Lorraine Hayes) and Danny (David Sharpe), blame Keith. The secret leader of the gang, John Abbott (Robert Fiske), persuades Danny to head a protective agency and the homesteaders are conned into signing over half their income to Abbott. Keith, meanwhile, secures a guarantee from the governor that law and order must be enforced but returns to Johnson City to find another of the homesteaders (Horace B. Carpenter) killed and Danny accused of being in cahoots with Abbott. Appointed special agent by the governor, Keith arranges for Abbott and Danny to be tried in court. When Frago attempts to kill a witness, Abbott is convicted of being behind the crimes. Well-acted in most parts, The Law Commands was the seventh of eight westerns Tom Keene made for Crescent Pictures.

Horace B. Carpenter
as Jason the lead farmer

Critic Reviews for The Law Commands

There are no critic reviews yet for The Law Commands. Keep checking Rotten Tomatoes for updates!

There are no featured reviews for The Law Commands at this time.