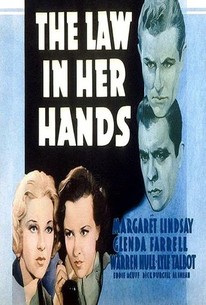 According to encyclopedic film historian Roger Dooley, The Law in Her Hands is the only film of the 1930s to concern itself with a pair of female legal partners. The firm of Mary Wentworth (Margaret Lindsay) and Dorothy Davis (Glenda Farrell) specializes in defending criminals -- and ethics are hardly a consideration. Mary is the more idealistic of the two, insisting that she is furthering the cause of justice by championing the underdog. She is shown the error of her ways by district attorney Robert Mitchell (Warren Hull), who is as handsome as he is honest. In a denouement that might prove amusing to real-life criminal lawyers, Mary not only "reforms," but also inaugurates the proceedings for her own disbarment! ~ Hal Erickson, Rovi

Billy Wayne
as Mug
View All

Critic Reviews for The Law in Her Hands

There are no critic reviews yet for The Law in Her Hands. Keep checking Rotten Tomatoes for updates!

Audience Reviews for The Law in Her Hands

Decent film that totally blows its concept in the final minutes.

The Law in Her Hands Quotes