The League of Gentlemen's Apocalypse (2005) 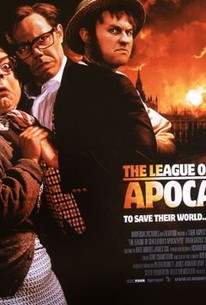 Three residents of a 1950s-era U.K. town experience apocalyptic events that transport them 50 years into the future, where they encounter a trio of time travelers who inform them that their entire lives were a work of fiction created by a popular comedy troupe called The League of Gentlemen. Saucy German Herr Lipp (Steve Pemberton), psychotic butcher Hilary Briss (Mark Gatiss), and unassuming businessman Geoff Tipps (Reece Shearsmith) were fleeing fireballs in fictional Royston Vasey when they ran into a church crypt, and emerged a half-century later in the real town of Hadfield. Later, as the hapless time travelers struggle to get their bearings, they encounter posh zookeeper Edward (Shearsmith), mysterious Tubbs (Pemberton), and imposing voodoo chief Papa Lazarou (Shearsmith) - who shock them with the news that they and their hometown are, in fact, entirely fictional.

News & Interviews for The League of Gentlemen's Apocalypse

Get Ready for the Return of … "Bean"

View All The League of Gentlemen's Apocalypse News

Critic Reviews for The League of Gentlemen's Apocalypse

With an embarrassment of comedy riches, Gatiss & Co will still leave some fans feeling disappointed.

Inventive, twisted and frequently hilarious, this is an enjoyable comedy that will appeal to both fans and newcomers to the series

Thankfully, not only have the League pulled it off magnificently, but they have remembered the most important thing of all -- how to be very, very funny indeed.

Audience Reviews for The League of Gentlemen's Apocalypse

Even though i've never seen the TV series or had ever heard of it until now, it was actually quite funny. It might take you a while to get what's going on in the film but it's very witty and decently made considering its budget. The League of Gentlemen's Apocalypse is stupid, disturbing and weird but at the same time it will suprise you in a good way.

A worthy big screen outing for Royston Vasey with lots for the fans to enjoy but perhaps lacking the darkness of the TV series.

It's not the measure of the first two series, but better than the third. And it's totally f***ed up in a rather inspired way! It almost reminded me of Time Bandits in places, which is no bad thing.

Once again a British TV show that was fantastic in half hour segments completely misses the mark. This is quite possibly the worst one of all. The writers may have thought they were being clever with their writing but instead it is just complicated and ridiulously stupid. There isn't a single laugh to be had, the only times I did laugh were forced. The League Of Gentlemen is reduced to fart, poo and other toilet humour. However they present it in such a crude manner it isn't funny. in fact Freddy Got Fingered had more laughs than this film.

The League of Gentlemen's Apocalypse Quotes