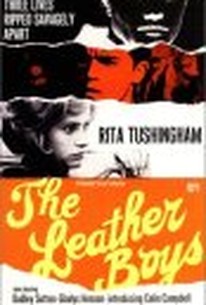 Dot (Rita Tushingham) is a girl who marries motorcycle maven Reggie (Colin Campbell) to escape her parents' influence. The marriage gets off to a rocky start and completely slides downhill after the honeymoon is plagued by bad weather. Dot refuses to have anything to do with household responsibilities and cooks only canned beans. Reggie loses interest in sex with Dot because of her actions, and after moving in with his grandmother, he begins to hang around Pete (Dudley Sutton). The two friends ride their motorcycles and begin to spend even more time together, and eventually Reggie realizes that Pete is a homosexual. Dot tells Reggie she is pregnant in an attempt to get him back -- with no result, but when Reggie comes home to find his wife in bed with another man, he decides to go off to sea with Pete. Pete leaves Reggie shaken and alone when he goes off with a group of sailors out to satisfy their same-sex lust. The film was controversial at the time of its initial release. ~ Dan Pavlides, Rovi

Critic Reviews for The Leather Boys

[Director Sidney J. Furie] and his cast, who are not constantly effective with a relatively thin theme, have managed to elicit honesty and genuine tenderness and humor from their simple drama.

It is this personal quality, this sense of intimacy, which, finally, is the achievement of Sidney Furie as a director.

Virtues of the pic lie in Sidney Furie's direction and in the two male performances.

What the film gets spot on is milieu. Its London streets are monotonous brick barracks. The houses reek of boiled potatoes, unwashed curtains, endless resentment. What hungry soul wouldn't want to flee? Or hear the engines of motorbikes as siren calls?

Pete is the film's hero and reason and charm. He is played with such accuracy and pathos by Dudley Sutton that no one and nothing else have much of a chance of getting our interest and sympathy.

The end result is fussy and flash rather than fresh, but the wedding and the Butlin's sequences are priceless relics of 1960s life.

In a film so obviously well thought out it is a shame to see excellence sacrificed to shallow writing.

Not the greatest of Britain's "angry young man" films of the period, but it benefits from good acting, Furie's evocation of "kitchen sink" realism and an attempt to be adult about hasty marriages and gay themes.

The Leather Boys is a brave and deliberately subtle film addressing issues of class, identity and, most directly, homosexuality, made at a time when being openly gay was still illegal under British law.

Audience Reviews for The Leather Boys

A classic kitchen sink drama, though not as well known as similar films of the period. The Leather Boys tells the story of two people who marry too young, and discoverer they don't really know each other. As the couple begin to drift apart, Reggie turns to his pal and begins to find out who he really is. Features great acting from the 3 leads (Campbell, Tushingham and Sutton), and was ahead of it's time due to the fact it features homosexuality. Overall if you like films from this period this is a must see.