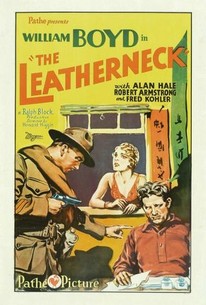 When Cecil B. DeMille's own production company was absorbed by Pathe in 1928, several DeMille contractees went along for the ride. One of these was William Boyd, the star of the 1929 Pathe effort The Leatherneck. The setting is China, specifically the headquarter of the 6th U.S. Marine regiment, where Calhoun (Boyd) and Schmidt (Alan Hale) are facing court-martial for desertion. In a series of flashbacks, the viewer is apprised of the reasons for the two leathernecks' supposed dereliction of duty. Essential to the action are a third marine, the unfortunate Joe Hanlon (Robert Armstrong), and a mysterious Russian girl named Tanya (Diane Ellis). A silent picture for most of its 76-minute running time, The Leatherneck includes approximately eight minutes' worth of dialogue.

Lloyd Whitlock
as Officer of the Court Martial

Lee Shumway
as Officer of the Court Martial
View All

Critic Reviews for The Leatherneck

There are no critic reviews yet for The Leatherneck. Keep checking Rotten Tomatoes for updates!

There are no featured reviews for The Leatherneck at this time.