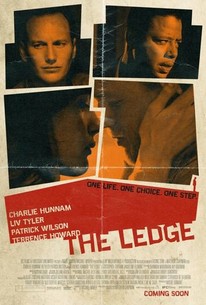 One step can change a life forever in The Ledge, a sexy and suspenseful thriller, starring Charlie Hunnam, Liv Tyler, Patrick Wilson and Terrence Howard. After embarking on a passionate affair with his evangelical neighbor's wife (Tyler), Gavin (Sons of Anarchy's Hunnam) soon finds himself in a battle of wills that will have life or death consequences. As a nonbeliever, Gavin is lured by her lover's husband (Insidious's Wilson) to the ledge of a high rise and told he has one hour to make a choice between his life or the one he loves. Without faith in an afterlife, will he be able to make a decision? It's up to police officer Hollis (Howard) to save both their lives, but the clock is ticking in this edge-of-your-seat film that will leave you gasping until the final frame. -- (C) IFC Films

Katia Gomez
as Selena
View All

News & Interviews for The Ledge

View All The Ledge News

Critic Reviews for The Ledge

Chapman coaxes good performances from his cast, especially Wilson, who makes Joe's immense conflicts a matter of empathy as much as abhorrence. But Chapman doesn't have the filmmaking skills to conceal the talky, formulaic narrative.

Gavin recalls his experiences while standing atop a building ready to jump; we're meant to be on edge ourselves, but the only real mystery is why Tyler took such an unrewarding role in the first place.

A film that's ultimately sabotaged by its own heavy-handed screenplay.

Unlike its talky hero, the credibility of this preposterous drama immediately plunges into the abyss.

Can't wait until Thanksgiving dinner to witness a pointless conversation between a pompous fundamentalist Christian and a sneering atheist? Then The Ledge is the movie for you.

What undoes it is its mechanical structure: a stale dramatic formula of the sort taught in elementary playwriting classes.

The Ledge has a couple very strong performances and it explores some interesting issues. There are some satisfying thrills to be had here and overall, it's not a bad watch.

Blake Griffin
We Got This Covered

A perfectly watchable drama, but it could have (and should have) been a bona fide thriller.

Covering well-worn territory and offering no solutions, it ends up feeling shrill and angry and not nearly as profound as Chapman seems to think it is.

Clunky writing and flat-footed direction derail this initially intriguing exploration into both the power and limits of belief.

The framing device of its conceit is beyond silly, and its religious and philosophical debate a tad inorganic, but ambition and intellect help drive and push The Ledge in interesting ways.

Nothing much holds together in this entropic drama that still manages to entertain sporadically through the efforts of its sincerely invested cast.

Audience Reviews for The Ledge

This is one of those films that has had the some fairly negative press, but it isn't as bad as it might seem. The idea here is quite good, but due to the fact that it mixes multiple genres and it's a film that doesn't know what it really tries to be. It's not a bad idea, but the film feels rushed in its ideas, and it doesn't try to elaborate in what it presents us in the film's story. The film presents good ideas as well, but it never really explores in depth what it suggests, and it's disappointing because if the ideas really would have been better developed, The Ledge would really have been a great film. This is a good affair, but it could have been so much more as well. The cast is quite impressive, and there are some good performances here as well. The Ledge isn't a perfect film, but it manages to be entertaining for what it tries to do. If the script would have been reworked slightly with some of its ideas better developed, then I think that the film would really have been a great affair. Though not perfect, The Ledge doesn't deserve the flack it has received, it's a film that manages to have good ideas in its plot that make for a good viewing experience. But since they are a bit underdeveloped, you simply are left wanting more out of the film. The film does have some tense moments, and has an interesting idea on faith, which is something we rarely see in films, and it pulls it off nicely.

I love, Charlie Hunnam. I am a big fan of his acting and looks. ;} But this movie just didn't do it for me. The story wasn't twisted or mysterious enough for me. Plus the ending sucked. I was hoping for a different outcome. The characters weren't that interesting and lacked depth. I couldn't bring myself to care for them and for what happened to them. Terrence Howard's acting is something I still find hard to like. I don't know what it is about the guy, but he just doesn't do it for me. It was a decent film, but if not for Charlie I wouldn't have rated it what I did or even given the movie a chance considering the plot of the film. If you choose to pass you wouldn't be missing anything.

Looked like a good cast but it was really slow going. I couldn't get into it.

"One life. One chance. One step." A police officer looks to talk down a young man lured by his lover's husband to the ledge of a high rise, where he has one hour to contemplate a fateful decision.

REVIEW
My, this movie has a lot of things spinning. It's like watching CNN for an hour with every conceivable topic trying to be covered. Here are some of them (I am sure I missed a few): religious conversion as in "born again" and no religion, infertility, adultery, gay, and trauma (all three main characters had some form of it). Conversations ensue on all these so it is a chatty film. But the plot moves along with good twists and turns with a conclusive ending. I did find the character played by Liv Tyler to be overly subdued and monotone - and she rather slowed the film down too much. Or this film lacked energy bursts sometimes. For characters with a dysfunctional past they didn't seem particularly animated. I refer in particular to Liv Tyler who was selling herself for drugs and found the Lord through her husband. Or said another way, I would have expected a woman who opens a beer bottle with her teeth to be a little more spunky! Her husband (Patrick Wilson), it would seem, was a one-time pornographer and dealer who also found the Lord's calling - his anger is suppressed through his Biblical utterances. The film does require some patience - it became too academic in the middle as well as artificial. I did enjoy the performance of Charlie Hunnan and Terrence Howard. In the end I suppose what we have left is love and acceptance.