The Legend of Tarzan2016 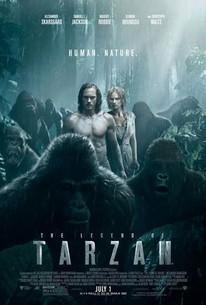 Critics Consensus: The Legend of Tarzan has more on its mind than many movies starring the classic character, but that isn't enough to make up for its generic plot or sluggish pace.

Critics Consensus: The Legend of Tarzan has more on its mind than many movies starring the classic character, but that isn't enough to make up for its generic plot or sluggish pace.

Critic Consensus: The Legend of Tarzan has more on its mind than many movies starring the classic character, but that isn't enough to make up for its generic plot or sluggish pace.

The Legend of Tarzan Videos

The Legend of Tarzan Photos

It has been years since the man once known as Tarzan (Alexander Skarsgård) left the jungles of Africa behind for a gentrified life as John Clayton III, Lord Greystoke, with his beloved wife, Jane (Margot Robbie) at his side. Now, he has been invited back to the Congo to serve as a trade emissary of Parliament, unaware that he is a pawn in a deadly convergence of greed and revenge, masterminded by the Belgian, Captain Leon Rom (Christoph Waltz). But those behind the murderous plot have no idea what they are about to unleash.

Miles Jupp
as The Valet

News & Interviews for The Legend of Tarzan

View All The Legend of Tarzan News

Critic Reviews for The Legend of Tarzan

The movie is so devoted to offering a clever course-correction of the Tarzan myth, while still staying true to that myth, that it overlooks its own impossibility.

Some things should be left in the past and forgotten. Case in point: Tarzan.

While technical aspects are strong, especially as they pertain to the motion capture effects utilized to bring the African beasts running through the jungle to life, sadly this is the end of the good news.

For all his ape-punching, wildebeest-grappling and months of work in the gym, Skarsgård is too tame to convince as a man whose heart is still in the jungle.

The Legend of Tarzan is a Marmite blockbuster that will repel and attract in equal measure.

The return to the intersection of Hollywood and vine deserved a more memorable retelling.

Maybe requiring 'The Legend of Tarzan' to resurrect the Tarzan brand in 2016 is a bit much to ask, but why return to this story and these characters in the first place?

The Legend of Tarzan falls flat in its storytelling and could benefit from trimming some of the political fat of the story to play on the classical themes of the tale.

Relies on snazzy filmmaking - lots of flashbacks and highflying action - and fetching leads to keep things interesting. Even then it feels as if Yates is holding back to ensure a young demographic friendly PG rating.

Apparently, despite holding records for being the most filmed character in cinema, Tarzan's story isn't popular enough to dispense with dreadful, brooding flashbacks.

The Legend of Tarzan isn't a bad film, just a disappointingly timid one.

Audience Reviews for The Legend of Tarzan

Very mediocre adventure about Tarzan's return to the jungle that has not one real animal and very few actual landscapes to offer. And even the CGI is not always that convincing, some of the effects were clearly made for the 3D spectacle at the movies, but feel very fake at home. Unfortunately, Skarsgard is neither very charismatic nor talented as a leading man, the rest of the cast is decent enough with SLJ bringing some fresh wind in his scenes. That's overall fairly entertaining but also rather shallow and not particularly pretty to look at.

If not for the many shirtless scenes with Alexander Skarsgård, "The Legend of Tarzan" would not be worth anyone's time. Samuel L. Jackson is ridiculous, Christoph Waltz is a caricature of God knows what, the script is insipid and the CGI is inept. But then again, there's Alexander Skarsgård -- and he's shirtless...so I can give a half-hearted recommendation based on that.

Chicago born author Edgar Rice Burroughs, in reading pulp magazines circa early 1900's, felt he could easily produce better material and subsequently came up with a story of a white orphan boy, raised by apes, who grows up to become king of the jungle. 100 years later and this story still stirs the hearts of city dwellers everywhere.Politically corrected and CGI enhanced bigtime this updated retelling has the apeman up against slavers as well as nefarious urbanite types (such as the sneering Chris Waltz, all but twirling his moustache ). Eh.

The Legend of Tarzan Quotes