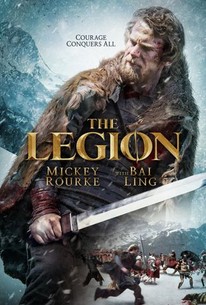 Mickey Rourke and Bai Ling star in this epic tale of courage and heroism in a time of war. During the invasion of Parthia, two Roman legions have been brought to a standstill in the snowy mountains of Armenia, leaving them slowly dying in the freezing cold. The rest of the Roman army is a two weeks' march away, and the region swarms with Parthian patrols. Their only hope for survival is Noreno, a half-Roman soldier, who is entrusted with the impossible mission of crossing the deadly terrain to seek help for his men and turn the tide of the battle.

Critic Reviews for The Legion

We are not entertained.

I cannot recommend The Legion in good conscience, unless you have a cross-country fetish.

Between the anachronistic dialogue, the lack of action or suspense, and a few random scenes with Mickey Rourke sporting an eye patch and talking to a Nero statue, it's a tedious mess.

There are no featured reviews for The Legion at this time.