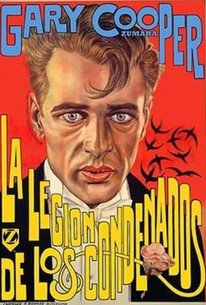 The Legion of the Condemned Photos

Director William Wellman's follow-up to Wings was based in part on his own WWI experiences with the Lafayette Flying Corps. Four young men from various walks of life sign up for the French escadrille known as "The Legion of the Condemned." In essence, all four are running away -- from the law, from love, from themselves. Whenever a suicide mission comes up, the four men draw cards to see who will fly off to near-certain doom. With his best friend Byron Dashwood (Barry Norton) already haven died in combat, Gale Price (Gary Cooper) waxes fatalistic when he draws the high card next time around. As he prepares to drop a spy behind enemy lines, Gale flashes back to the events leading up to this moment -- specifically, to his ill-fated romance with Christine Charteris (Fay Wray), whom he has been led to believe is a German spy. Returning to the present, Gale discovers that his passenger is Christine, who is actually an operative in the French secret service. Before explanations can be exchanged, Gale is obliged to fly Christine to her rendezvous point. She is arrested as a spy and sentenced to be executed but is saved when the firing squad is decimated by a bombing raid, paving the way for a tender reunion with Gale. The screenplay for Legion of the Condemned was written by Wellman and his Wings collaborator John Monk Saunders.

Critic Reviews for The Legion of the Condemned

A somewhat unconvincing attempt to give an idea of aviators as bearers of spies is stressed throughout this film. Mr. Wellman does not reveal as much imagination as one would like to see in these stretches.

The story of the film drama is interesting, and the situations full of thrill.

The final scenes in the drama are both exciting and interesting.

There can be no complaints about the screen being surfeited with war stories just as long as they stack up as good as this one.

Gary Cooper does well and so does Fay Wray and E. H. Calvert as the Commandant gives probably the most believable performance of all.

[It is] a magnificent picture, produced by William Wellman with that same meticulous regard to detail which characterised Wings, with the spectacular added not too liberally, and with a powerful story unfolded on the screen by an excellent cast.

A powerful aviation melodrama, similar to Wings. Though Wings is much more spectacular than The Legion of the Condemned, a great many of the situations in the latter picture are more dramatic than those in Wings.

The wonderfully photographed scenes of airplanes, singly and in groups, shown in actual operation at the seat of war, would alone suffice to make this film one of the most fascinating of the year.

The Legion of the Condemned stands high in the first rank of productions that the war has given us.

This picture has been heralded as the companion to Wings. Emotionally it is above Wings. The leading roles are played by Fay Wray and Gary Cooper and the combination is one that the public will love.

There are no featured reviews for The Legion of the Condemned at this time.

The Legion of the Condemned Quotes