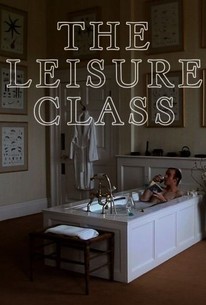 A dashing English con man's scheme to marry into a prominent East Coast family is threatened by the arrival of his unhinged, ne'er-do-well brother on the eve of his wedding to the daughter of a U.S. senator. Feature directorial debut for Jason Mann, the winner of the fourth season of HBO's "Project Greenlight."

Critic Reviews for The Leisure Class

I'm not sure that the movie, in the end, was worth everything that went into making it.

You can see the vague outlines of what Mann was going for here-the sort of lighthearted farce that deepens into nightmarish black comedy as the night progresses... He doesn't come close to pulling it off, though.

We're here to judge The Leisure Class itself, and hoo boy, what a whole lot of nothing this purported comedy is.

It's insubstantial, clumsy, and ineffective as either comedy or drama.

...a half-baked idea that clearly needed more time in the writing phase.

The Leisure Class ends up making its most cogent comment on the leisure-class of show business - all these over-paid, over-indulged people, collaborating to give birth to a dull baby.

The targets aren't particularly distinctive, and the notion of the entire narrative unfolding over a 24-hour period, as executed, makes for a rather blunt, heavy-handed approach.

Audience Reviews for The Leisure Class

A mess. Boring. The two male leads offer nothing to engage audiences. For all of the talk about the director being so focused the the film's visuals there is not one interesting image on the screen. The only positives are the performances of Bruce Davison and Bridget Regan. It appears that the scenes when they're to act exasperated may have been inspired by what had to be a truly terrible working experience.