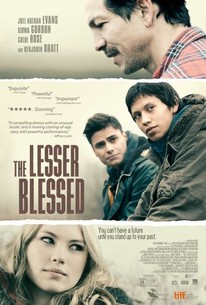 Premiered to critical acclaim at the Toronto International Film Festival (TIFF), and based on the celebrated novel by Richard Van Camp, The Lesser Blessed is an eye-opening depiction of what it is like to be a vulnerable teenager in today's modern world. Through the eyes of Larry Sole, a First Nation teenager filled with bravado and angst, fragile and yet angry, seeking clarity clouded by confusion, seeking to belong without belonging, comes the story of three unlikely friends isolated in a small rural town discovering what they can of life and love amid racial tensions and the recklessness of youth, in a world clouded by a dark mystery from his past.

Critic Reviews for The Lesser Blessed

Despite [the movie's] issues, Doron has no trouble capturing the haunting grace of place and people and the harsh realities faced by "The Lesser Blessed."

Part of the long march of misunderstood movie adolescents that leads from the frozen Canadian North straight down to James Dean's Los Angeles in Rebel Without a Cause.

[Doron] has assembled a uniformly solid cast, starting with an impressive debut by Evans, whose brown eyes are both soulful and watchful. It's a performance that commands our attention and empathy.

The emotions present in Anita Doron's film still feel fresh and universal, even if some of the dialogue is clunky.

It's an undeniably noble effort from all involved, but the dreary denouement makes viewer feel lesser than blessed.

Audience Reviews for The Lesser Blessed

There are no featured audience reviews yet. Click the link below to see what others say about The Lesser Blessed!