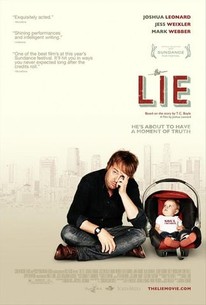 When they first met, Lonnie and Clover were young idealists, but an unplanned baby forced them to flip the script. Lonnie put his music on hold and got a shitty job. And now Clover is abandoning her activism for an "opportunity" in the corporate world. Drowning in disappointments, Lonnie decides he needs some time off work to reexamine his life. He calls in sick, but his abusive boss demands he show up or get fired. Lonnie panics and tells a shocking lie to justify his absence - and once the lie if out, there's no going back. Now it's only a matter of time before the grenade he's thrown on his life explodes and Lonnie is suddenly pushed to figure out who he is, what he wants, and just maybe, what it means to be a father. -- (C) Screen Media

Violet Long
as Xana
View All

News & Interviews for The Lie

View All The Lie News

Critic Reviews for The Lie

The acting in The Lie -- including a nice bit by Mark Webber as a stoner pal who lectures Leonard on responsibility -- is good enough to almost overlook a so-so ending.

Comprising small, near-perfect scenes played out largely at dinner tables and on couches, "The Lie" wonders if it's possible to rewrite lives and remake choices.

It doesn't try too hard, but what "The Lie" is working at, in its unassuming, amusing way, is a mini-portrait of growing pains in a time of extended adolescence.

Here's a film in which the actors create plausible people we would probably like. They're loose inside the skins of their characters.

Leonard does a nice job of ramping up the comedy without sacrificing the believability of the world he's established; the movie is very funny at times but it's never outlandish.

A well acted and uncommonly assured and engaging portrait of post-millennial and particularly male uncertainty.

Embedded in The Lie is a sharp look at the moral limbo of a complacent life, the self-defeat of committing by halves, the self-interest of false equivalencies - but only the shallowest attempts are made to chip its themes out.

The Lie is a sturdy directorial debut from actor Joshua Leonard.

This is an assured directorial debut that goes beyond what we often see out of indie filmmakers.

It's funny, touching and truthful and its total lack of cynicism is rare but very welcome.

Audience Reviews for The Lie

There are no featured audience reviews yet. Click the link below to see what others say about The Lie!