The Life & Adventures of Santa Claus1985 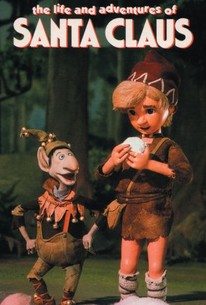 A puppet-animation feature, noted for artistic values and story line, The Life and Adventures of Santa Claus is based on a children's story by L. Frank Baum. In the Pagan tale, Santa grows old and nearer to his death, and the story of his life is relayed to immortals who must decide whether or not Santa Claus should be one of those who gets to live forever. Thus, the way Santa came to represent Christmas is explained from the time he was taken in as an orphan by the gods through the time he decided to make it his life's work to bring happiness to children by making and bringing them toys.

Alfred Drake
as The Great Ak

Marty Nelson
as Chorus
View All

Critic Reviews for The Life & Adventures of Santa Claus

It badly botches what a Christmas special should be, and is worth watching mainly for unintentional laughs.

This is something like Rankin/Bass's fifth attempt to tell the back-story of the jolly old elf. But there's something so pleasingly goofy about Santa wandering into scenes that might as well be ripped from the pages of Marvel Comics.

Mr. Baum's peculiar vision can be filled with all sorts of deliciously scarifying elements, but the underlying theme is unfailingly comforting.

Lacks the lighthearted charm of the earlier specials, but makes up for it in its tight plot and the best Animagic the studio ever did.

It's Rankin/Bass doing high fantasy in ways they never did before, the stop-motion is smooth and gorgeous, and it's worth seeking out just for how strange it is.

The special is peppered with dazzling characters courtesy of Baum's highly inventive imagination, coupled with terrific stop-motion animation that brings the marvelous characters to life in extraordinary ways.

Seems like it was written by somebody who never heard of Santa Claus before. It's like a knock-off action figure at a dollar store: parts of it look vaguely familiar, yet it's all inherently wrong.

Animated tale is heavy on fantasy, has some scariness.

Audience Reviews for The Life & Adventures of Santa Claus

There are no featured audience reviews yet. Click the link below to see what others say about The Life & Adventures of Santa Claus!