The Light Between Oceans2016 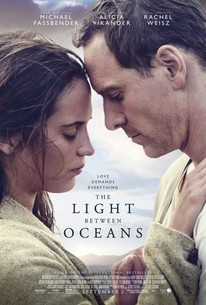 Critics Consensus: The Light Between Oceans presents a well-acted and handsomely mounted adaptation of its bestselling source material, but ultimately tugs on the heartstrings too often to be effective.

Critics Consensus: The Light Between Oceans presents a well-acted and handsomely mounted adaptation of its bestselling source material, but ultimately tugs on the heartstrings too often to be effective.

Critic Consensus: The Light Between Oceans presents a well-acted and handsomely mounted adaptation of its bestselling source material, but ultimately tugs on the heartstrings too often to be effective.

The Light Between Oceans Videos

The Light Between Oceans Photos

DreamWorks Pictures' "The Light Between Oceans" is a heart-breaking drama about fate, love, moral dilemmas and the lengths to which one couple will go to see their dreams realized. Starring Academy Award (R) and Golden Globe (R) nominee Michael Fassbender, Oscar (R) winner Alicia Vikander, Academy Award and Golden Globe winner Rachel Weisz, Bryan Brown and Jack Thompson, the film is written for the screen and directed by Derek Cianfrance based on the acclaimed novel by M.L. Stedman. The producers are Academy Award nominee David Heyman, p.g.a. and Jeffrey Clifford, p.g.a. with Tom Karnowski, Rosie Alison, Jeff Skoll and Jonathan King serving as executive producers. In the years following World War I, Tom Sherbourne (Michael Fassbender), a young veteran still numb from his years in combat, takes a job as lighthouse keeper on Janus Rock, a remote island off the coast of Western Australia. As the island's sole inhabitant, he finds comfort in the monotony of the chores and the solitude of his surroundings. When he meets the daughter of the school's headmaster, Isabel Graysmark (Alicia Vikander), in the local town of Partageuse on the mainland, Tom is immediately captivated by her beauty, wit and passion, and they are soon married and living on the island. As their love flourishes, he begins to feel again, their happiness marred only by their inability to start a family, so when a rowboat with a dead man and infant girl mysteriously washes ashore, Isabel believes their prayers may have finally been answered. As a man of principle, Tom is torn between reporting the lost child and pleasing the woman he loves, and against his better judgment he agrees to let Isabel raise the child as their own, making a choice with devastating consequences. DreamWorks Pictures' "The Light Between Oceans" opens in U.S. theaters on September 2nd.

Elsa May
as Mrs. Mouchmore

Critic Reviews for The Light Between Oceans

With strong acting as its anchor, breathtaking cinematography accompanies this tale guaranteed to tug on those heartstrings.

From lesser actors, the story would have definitely become the worst Nicholas Sparks film adaptation ever. But they make you feel for them, even when they're making poor life decisions that you know will end miserably.

Instead of tear-jerking, this approach eventually sees the audience dry-eyed with irritation.

For those who have not read the book, there are some significant surprises in store -- while those who have will, I think, be satisfied with this handsome adaptation.

By the end, you may be surprised at yourself shedding a tear or two but it won't inspire the kind of all-encompassing emotional heaving the best weepies induce.

A story like The Light Between Oceans, used age-appropriately, of course, could provide parents and teachers with a powerful opportunity to talk about how making good decisions isn't always easy...

Plays like a highbrow Nicolas Sparks story in period clothes.

The Light Between Oceans is a film about the way that tragedy can connect families, whether they want it to or not. A sin, like even the smallest drop in the ocean, can carry ripples far and wide.

I didn't really enjoy it.

The dialogue and the characters weren't compelling enough for me.

Audience Reviews for The Light Between Oceans

Like a restaurant that advertises steak but rather serves hamburger.

Cianfrance has become an "expert" in corny melodramas, and this is like a shameless telenovela that suffers even more from the fact that there is no chemistry between the two bland leads and nothing in there to make us feel any sympathy for a couple of baby kidnappers.

The Light Between Oceans deals with tragedy and 'what if' scenarios in a fascinating way that will have you weighing in on the "right thing to do" vs. "what feels right". The moral quandary is heightened by a series of events that veer dangerously close into melodrama. Yet screenwriter Derek Cianfrance masterfully weaves an ethical dilemma to keep the viewer's attention enrapt. It's also acted to perfection by Alicia Vikander and Michael Fassbender, both fresh from recent Academy Awards nominations last year. She won. He didn't. It certainly doesn't hurt that the two are amorously involved off screen as well. So yeah, they have chemistry together. That's pretty important in a love story and a key element as to why this romance works. There are some irksome developments. A frustrating resolution could have easily been averted with a simple conversation or two. But ah, such is life! The real world can be troublesome. The Light Between Oceans has flaws, but it will also make you feel. More often than not, that emotion comes naturally. We need more experiences like that at the cinema. fastfilmreviews.com

A melodrama through and through, The Light Between Oceans is at its core a pretty-looking movie about pretty-looking people being sad. The premise almost seems like a parody of prestige indie filmmaking in the 1990s. Tom (Michael Fassbender) is a shell-shocked WWI vet-turned-lighthouse keeper in Australia who falls in love with mainland lady, Isabel (Alicia Vikander). They marry and have difficulty conceiving, with Isabel enduring two grueling miscarriages. Then one day a dingy washes ashore with a crying baby inside and a dead man. Rather than alert the proper authorities, they decided to bury the man and raise the child as their own. Years later, the couple discovers the girl's real mother, Hannah (Rachel Weisz), who has been racked with unanswered grief ever since. The couple is then thrown into an emotional crucible testing their ethics and moral compromises and the question of ultimately what's in the best interest of this little girl. It's a movie that's geared to put you through an emotional wringer, and the actors do their part. Vikander (Oscar winner for The Danish Girl) is downright luminescent and dives deep into all of her character's varied and heightened emotions. The scenes of her dawning realization of the miscarriages and her helplessness are heartbreaking without being maudlin. Weisz is shaken to the core when her identity is robbed from her; she's so fragile and holding on to hope so hard you might think she'll collapse any moment. Fassbender internalizes the most and fully communicates the inner struggle of his character's guilt. Director and chief adapter Derek Cianfrance (The Place Beyond the Pines) has made an intimate relationship drama in a beautiful, sea-swept location, and the kind of Big Feeling classy melodrama you came to expect from Anthony Minghella. The problem is that Cianfrance's characters are held too much at arm's length for resonance. We empathize but not nearly as deeply as we could, and by the end the movie washes away like the surf. Nate's Grade: B-

The Light Between Oceans Quotes