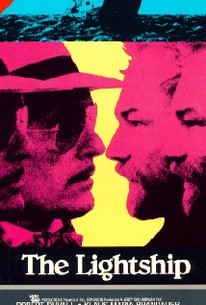 Jerzy Skolimowski directed this allegorical drama taking place in 1955 aboard an anchored U.S. Coast Guard ship that serves as a lighthouse, preventing vessels from crashing into the rocks on the Virginia shore line. The lightship commander, Captain Miller (Klaus Maria Brandauer), is a German-born American who is haunted by a terrible experience from World War II. As a commander of a destroyer, he chose to chase after a German U-boat rather than pick up victims from the sea. Miller lives on the lightship with his troubled teenage son Alex (Michael Lyndon) and a tiny crew. When Miller spots a wrecked speedboat, he rescues the victims and brings them aboard the lightship. Unfortunately for Miller, the survivors are an unsavory lot -- a distasteful homosexual psychopath named Caspary (Robert Duvall) and his two low-life brothers, Gene (William Forsythe) and Eddie (Arliss Howard). Once aboard the lighthouse, the trio try to compel Miller to take them to their destination, but Miller resists, refusing to abandon the Virginia coast.

Timothy Phillips
as Thorne
View All

Critic Reviews for The Lightship

It's noted for the inventive performance of Robert Duvall.

Much of the narrative is airy at best -- deadly dull at worst.

Audience Reviews for The Lightship

When I found this movie on VHS I was SO happy!!! I LOVE when I find movies I've never heard of before so I couldn't wait to get home & watch it.After watching it I see why I've never heard of it before.Robert Duvall & his 2 goons reminded me of the characters in The Ladykillers Even though Robert Duvalls Caspary was a psychotic nutjob, there are times where you can't help but almost laugh at him.His character is just way over the top.The movie is OK watching it once but after watching it once, I don't think it's something you'll ever watch again.The good thing about The Lightship is I never knew what a lightship was till I watched The Lightship