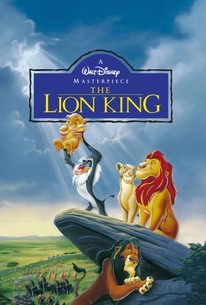 One of the most popular Disney animated musicals, The Lion King presents the story of a lion cub's journey to adulthood and acceptance of his royal destiny. Simba (voiced first by Jonathan Taylor Thomas, then by Matthew Broderick) begins life as an honored prince, the son of the powerful King Mufasa (voiced by James Earl Jones). The cub's happy childhood turns tragic when his evil uncle, Scar (voiced by Jeremy Irons), murders Mufasa and drives Simba away from the kingdom. In exile, the young lion befriends the comically bumbling pair of Pumbaa the warthog (voiced by Ernie Sabella) and Timon the meerkat (voiced by Nathan Lane), he and lives a carefree jungle life. As he approaches adulthood, however, he is visited by the spirit of his father, who instructs him to defeat the nefarious Scar and reclaim his rightful throne. Borrowing elements from Hamlet, classical mythology, and African folk tales, The Lion King tells its mythic coming-of-age tale with a combination of spectacular visuals and lively music, featuring light, rhythmic songs by Elton John and Tim Rice, and a score by Hans Zimmer. Embraced by children and adults alike, the film also spawned hit songs ("Can You Feel the Love Tonight," "The Circle of Life") and a hit Broadway musical. In late 2002, The Lion King was re-released in the large-screen IMAX format. ~ Judd Blaise, Rovi

David McCharen
as Other Voices

Phil Proctor
as Other Voices

Cathy Cavadini
as Other Voices

Judi M. Durand
as Other Voices
View All

Critic Reviews for The Lion King

The Lion King is short on humor, long on melodrama and AWOL on fun. It was intended to be important and is pretentious instead.

Make no mistake, the magnitude of the achievement here far outweighs any shortcomings. The Lion King is both populist blockbuster and royal treat.

A certain blockbuster and a future classic, The Lion King is a scrumptiously delightful moviegoing experience.

At this point in animation history, we can expect no less than perfection from Disney, and they deliver.

The Lion King, complete with jaunty songs by Elton John and Tim Rice, is undeniably and fully worthy of its glorious Disney heritage. It is a gorgeous triumph -- one lion in which the studio can take justified pride.

Disney' newest animated feature is an explosion of color and emotion. This tale of a lion cub growing up to avenge his father's death is filled with primal themes and deep feelings.

The Lion King is classic, first-rate Disney, an animated musical for all ages that will roar its way to huge grosses and take its place among Disney's best.

The Lion King, Walt Disney's 32nd full-length animated film, is a glorious hodgepodge, a jumble of styles, emotions and ideas that turn into something wonderful. This is Disney animation at its best -- and at its most sentimental.

The Lion King boasts a top-notch story, excellent characterizations, instantly hummable tunes, and some of the best artwork and animation the company's ever done. It's a classic from the opening sequence.

Mike Massie
Gone With The Twins
View All Critic Reviews (136)

Audience Reviews for The Lion King

(3D review) When hearing they were remaking one of my favorite Disney animated films in 3-D for its 20th anniversary, you can bet I got hyped, and boy did this film not disappoint. I saw this on opening day, now prior to hearing about this I hadn't seen the film in about 3 years so I didn't want it to be ruined if I watched it the week/night/month before seeing the film, and that was a wise decision on my part, because the refreshing of my memory with this film worked and it was almost like a new experience to me. Also the 3-D in this film is incredible, I'm rarely blown away by 3-D but here, my god, the 3-D matched the animation so perfectly, that this film and 3-D were made for each other.

A great 2-d animated film as a young lion cub comes back to the pride to rule as King of the Jungle.

"The Lion King" has been such an important part of so many childhoods since it came out, but what is so remarkable is that, whereas some childhood entertainment loses a lot of luster once the nostalgia-goggles come off, I find my appreciation for this film to grow the older I get. I personally don't believe Disney has yet created a more beautiful film, since it isn't just a detailed rendition of African wildlife, but its such a deliriously colorful and expressively animated film to boot. The story is honest in its portrayal of the corruption that exists in the world, but more importantly, in the hope that good moral judgement can overcome such corruption. The voice cast is pitch-perfect, the soundtrack remains the absolute greatest in animated film history, and the script (while perhaps not wholly original) deftly balances searing emotional truths with charmingly silly antics.

A well made film with beautiful animation and a great soundtrack. Many of the themes are for a mature audience which isn't necessarily surprising for a Disney feature. It offers a powerful story that can be enjoyed by kids and adults. "The Lion King" is a film that defined my childhood and is one I still enjoy.