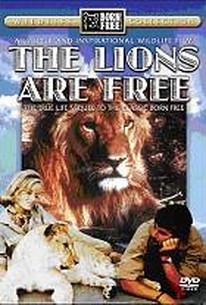 While on location in Kenya filming Born Free, actor Bill Travers became fascinated with the tame lions with which he was "costarred." Three years later, Travers brought into being the feature-length documentary Lions are Free. Like Born Free, the film explores the advisability of granting freedom to lions that have been raised in captivity. And also like Born Free, The Lions are Free was lensed in its entirety in Kenya. The same year that Lions was released, Travers offered a similar location-filmed effort, An Elephant Called Slowly; seven years later, he continued in this vein with Christian the Lion. ~ Hal Erickson, Rovi

Critic Reviews for The Lions Are Free

There are no critic reviews yet for The Lions Are Free. Keep checking Rotten Tomatoes for updates!

There are no featured reviews for The Lions Are Free at this time.

The Lions Are Free Quotes