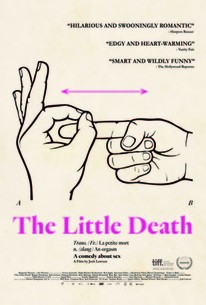 Critics Consensus: The Little Death may appeal to fans of dark, risqué comedy, but it's ultimately too rough and uneven to hang together as a wholly satisfying viewing experience.

Critics Consensus: The Little Death may appeal to fans of dark, risqué comedy, but it's ultimately too rough and uneven to hang together as a wholly satisfying viewing experience.

Critic Consensus: The Little Death may appeal to fans of dark, risqué comedy, but it's ultimately too rough and uneven to hang together as a wholly satisfying viewing experience.

THE LITTLE DEATH, which marks the arrival of Australian writer-director Josh Lawson, is both an edgy sex comedy and a warm-hearted depiction of the secret lives of five suburban couples living in Sydney. Lawson's searing and sometimes shocking screenplay weaves together a story that explores a range of sexual fetishes and the repercussions that come with sharing them. Featuring an ensemble of breakthrough talent, the film was produced by Jamie Hilton, Michael Petroni and Matt Reeder; and executive produced by Phil Hunt, Compton Ross, Josh Pomeranz, Viv Scanu and Stephen Boyle. (C) Magnolia

Tasneem Roc
as Yael
View All

News & Interviews for The Little Death

View All The Little Death News

Critic Reviews for The Little Death

Frequently funny and sometimes perhaps offensive in the darkness of its humor.

The Little Death is [Lawson's] feature film debut, and it's beautifully scripted, each of its five story lines working out the comic implications of a perverse urge.

it goes down as easy as Junior Soprano on Bobbi Sanfillipo, which is both a blessing and a curse for Lawson's Hollywood-slick romantic comedy.

The mood will be too mild and shock-free for fans of Todd Solondz or early Neil LaBute; yet the film is sufficiently cool and quizzical to make you wonder where Lawson will turn next.

There is simultaneously too much and not enough going on in writer/director/co-star Josh Lawson's feature debut.

In the end, the film doesn't work.

What will likely make "The Little Death" more resonant is how organically funny it is, smuggling in bits of truth about the ways we hide our true selves from one another amidst a sea of well-conceived and executed comic set-ups.

So entertaining, so funny, so hilarious.

This debut feature deftly weaves together a host of surreal scenarios into a consistently funny and surprising package, as performed by a top-notch cast that includes stage luminaries Kate Mulvany and Damon Herriman.

Josh Lawson's film does its best not to judge its characters, and his jokes occasionally probe some dark and daring territory.

Audience Reviews for The Little Death

This film has grown on me over the years. At first I dismissed this as a one dimensional boring film, but watching it again I have grown with appreciation. The film is going to develop a cult following over the next years. It is a film destined to be rediscovered and shared with other film buffs. It is dark and doesn't attempt to consume the viewer with a sugar coated happy ending. I hope the filmmakers can move onto bigger things as this unfairly missed the masses. Great performances and a sadistic dark tone help create one of the better Australian films. 10/04/2019

Generally, kinky sex is depicted in very strange environments, and is often not consensual. This can be seen in shows like "Game of Thrones," and "Girls." There's generally no relationship between the two characters, and kinks are depicted as either tenets of mental illness or the power hungry machinations of bloodthirsty warriors. This film, while not perfect and is oddly formed, does a good job of normalizing the fetishes of everyday, normal people, most of whom are in relationships. Read more at bluefairyblog.com