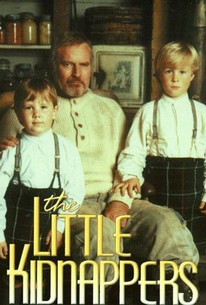 1990's Little Kidnappers was a remake of the 1954 British film of the same name. Two Canadian orphans (Leo Wheatley and Charles Miller) are starved for affection. Their cantankerous, self-absorbed grandfather (Charlton Heston) pays very little attention to them. The boys "borrow" a baby so they can raise it as their very own, while the real parents--and the police--scour the countryside in search of the missing infant. This location-filmed version of The Little Kidnappers premiered over the Disney cable channel on August 17, 1990.

Critic Reviews for The Little Kidnappers

"The Little Kidnappers" is a beautifully photographed, unashamedly sentimental tale of conflict resolved through innocence.

While much of what happens in ``The Little Kidnappers'' is predictabl... what makes it so enjoyable are the completely unself-conscious performances by Leo Wheatley and Charles Miller, as Harry and Davy MacKenzie.

"The Little Kidnappers" is a little precious and a little drawn-out, but for kids who aren't so little -- pre-teens and up -- and who have a little patience, considerable satisfaction can be had by watching it.

There are no featured reviews for The Little Kidnappers at this time.