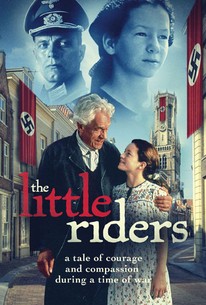 Filmed on location in Holland, the made-for-cable The Little Riders is set during the wartime Nazi occupation of that country. Living with her Dutch grandparents in the village of Kirkendam, American-born Joanne Hunter (Noley Thornton) is a helpless bystander in the real-life drama being played out between the locals and German occupational officer Captain Kessel (Malcolm McDowell). Grimly determined to break down any and all resistance to the Nazis, Kessel is prepared to destroy the villagers' most cherished possession: He intends to dismantle the six lead statues--or "little riders"--which revolve hourly on Kirkendam's 300-year-old clock tower, and melt them down for bullets. Intensifying the situation is the growing relationship between Joanne and Lt. Braun (Benedick Blythe), a conscience-stricken German officer billeted in her grandparents' home. Paul Scofieldheads the cast as the clock's caretaker, who also happens to be the head of the resistance movement--not to mention Joanne's grandfather. The Little Riders debuted March 24, 1996, over the Disney Channel. ~ Hal Erickson, Rovi

Critic Reviews for The Little Riders

This is a small tale, affectingly told. And the cast is superb: Paul Scofield as the caretaker, Rosemary Harris as his wife and Noely Thornton as their spirited American granddaughter.

There are no featured reviews for The Little Riders at this time.