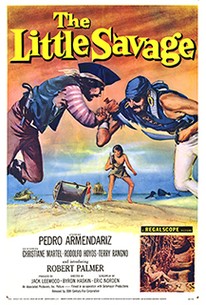 A routine swashbuckler set during the 18th century when pirates still roamed the Spanish main, this adventure film stars popular Mexican idol Pedro Armendariz as the appropriately named Captain Tiburon (Capt. Shark). Tiburon and his first mate Taursus (Rodolfo Hoyos) bury two treasure chests on a remote island, and then Taursus betrays the Captain by shooting him and leaving him for dead, with plans to come back later and pick up the loot. The Captain is saved by the only other inhabitant of the island, a young boy named Frank (Terry Rangno, with Robert Palmer as the adult Frank). As time goes by, the two have several adventures, including a battle with an invading war party about to sacrifice a comely maiden. She of course, is saved. But the adventure is not over because Taursus will one day return for the treasure chests. This film was paired with The Sad Horse in double-billing on its release. ~ Eleanor Mannikka, Rovi

Terry Rango
as Frank as a Boy

Terry Rangno
as Frank as a Boy

Robert Palmer
as Frank as a Man

Critic Reviews for The Little Savage

There are no critic reviews yet for The Little Savage. Keep checking Rotten Tomatoes for updates!

There are no featured reviews for The Little Savage at this time.