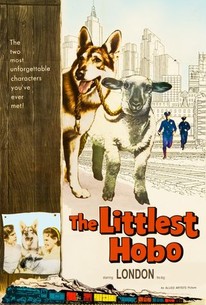 Largely filmed in Canada, The Littlest Hobo was the result of a brainstorming session between Dorrell and Stuart McGowan, the same sibling production team responsible for TV's Death Valley Days. Hobo is a homeless German shepherd, whose adventures begin when he hops off a freight train in a strange town. Naturally drawn to down-and-outers, Hobo rescues a lamb that is slated for the slaughterhouse. The rest of the film concerns the dog and lamb's many trials and tribulations as they elude the authorities. Ideal for kiddie-matinee showings, Littlest Hobo also has much to offer for adult moviegoers. The film spawned a 1963 TV series, also assembled by the McGowan brothers.

Howard Hoffman
as Captain in Mission

Robert Klein
as Mike
View All

Critic Reviews for The Littlest Hobo

There are no featured reviews for The Littlest Hobo at this time.