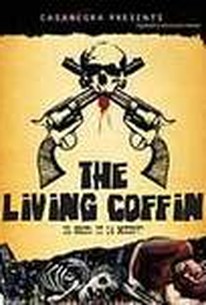 The Living Coffin is a Mexican filmization of that old Edgar Allan Poe standby The Premature Burial. A seriously ill woman is terrified that she'll be buried while in a comatose state. To avoid this contingency, she has an alarm installed inside her coffin (indicating that someone involved with this film had seen the 1931 Paramount chiller Murder by the Clock). It comes to pass that the woman is indeed declared dead, planted six feet under, and.....hoo hoo hah hah HAAAAH! The legendary B-flick showman/huckster K. Gordon Murray filmed The Living Coffin in 1958 under the title El Grito de la Muerte; it didn't make the American rounds until 1965 (talk about rising from the dead!) ~ Hal Erickson, Rovi

There are no critic reviews yet for The Living Coffin (Grito de la muerte, El). Keep checking Rotten Tomatoes for updates!

This is a real cool movie, somehow it got added to my list of Mexican horror and I purchased it thinking it was part of the K.Gordon Murry Collection, but as far as I can tell Murry had nothing to do with this film. This is a Mexican Horror / Western with a little bit of Comedy. It comes with English Subtitles, or English Language, but as with all movies from other lands I enjoy hearing the native language and reading subtitles after all I might learn something. Our Hero who I am told is a ex-bullfighter that was pretty good, is trying to track down the crying lady. Nothing really scary but this movie will keep you interested through out the whole film. Its in great color. Has a littlle bit of everything, Pimp dressed cowboys, monsters, secret passages, a trick horse giving Trigger and Roy Rogers compitition. The year 1959 and for that fact and the effort put in by the entire crew, 4 stars.