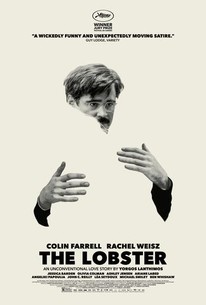 Critics Consensus: As strange as it is thrillingly ambitious, The Lobster is definitely an acquired taste -- but for viewers with the fortitude to crack through Yorgos Lanthimos' offbeat sensibilities, it should prove a savory cinematic treat.

Critics Consensus: As strange as it is thrillingly ambitious, The Lobster is definitely an acquired taste -- but for viewers with the fortitude to crack through Yorgos Lanthimos' offbeat sensibilities, it should prove a savory cinematic treat.

Critic Consensus: As strange as it is thrillingly ambitious, The Lobster is definitely an acquired taste -- but for viewers with the fortitude to crack through Yorgos Lanthimos' offbeat sensibilities, it should prove a savory cinematic treat.

Colin Farrell stars as David, a man who has just been dumped by his wife. To make matters worse, David lives in a society where single people have 45 days to find true love, or else they are turned into the animal of their choice and released into the woods. David is kept at the mysterious hotel while he searches for a new partner, and after several romantic misadventures decides to make a daring escape to abandon this world. He ultimately joins up with a rebel faction known as The Loners, a group founded on a complete rejection of romance. But once there David meets an enigmatic stranger (Rachel Weisz) who stirs up unexpected and strong feelings within him... At once a full immersion into a strange and surreal world, and a witty and clever reflection of our own society, THE LOBSTER is a thrillingly audacious vision fully brought to life by Lanthimos and his terrific cast. The filmmaker displays a completely singular style and mastery of tone, finding the perfect balance between sharp-edged satire and romantic fable that entertains its audience while also leaving them with lots to reflect on long after the credits have rolled.

Ben Whishaw
as The Limping Man

Ariane Labed
as The Maid

News & Interviews for The Lobster

View All The Lobster News

Critic Reviews for The Lobster

Like all good satire, it takes what's already obvious about the world around us and just transforms it into something new.

Part of the joy of Lanthimos's film is seeing in it any degree of subtext you like.

This is the type of film I'm going to watch multiple times, obsessing over every choice Lanthimos and his talented team of cinematic craftsmen made in order to see it come to life.

There is so much more, but part of the (perverse) pleasure of The Lobster is how it keeps you off guard, never lets you feel settled.

The Lobster argues that the kind of pressure society places on us to find a soulmate can lead to reckless choices. But the movie gives the alternative - people who are happy being single - the same radical treatment.

Lanthimos doesn't deliver all the way, but he sticks his landing mightily and whets appetites for whatever he decides to do next.

The defining sensation is that of watching your favorite football team run up the score on an inferior opponent and then letting the game slip away during the second half, requiring a field goal in the closing seconds to escape with the victory.

Unique and refreshingly original both in concept and style.

Colin Farrell is paunchy and hilarious in a surreal, unpredictable comedy...

Characters in the film still abide by the social conventions, but their desire to be with someone and not be lonely is stronger than anything. It's the most romantic movie I've seen in a while.

Lanthimos has become one of Greece's most internationally prominent directors. It is revealing that he has no comment to make about the ongoing crisis in Greece except in regard to the financial difficulties it has caused filmmakers like himself.

The humor remains strong, but the narrative turns cryptic, which might disconcert even those audiences looking for a bitter, deadpan experiment in metaphorical erraticism.

Mike Massie
Gone With The Twins
View All Critic Reviews (265)

Audience Reviews for The Lobster

This would have appealed to me ten years ago. Now, it is just plain pretentious and insincere.

Whilst the concept is flawless and intelligent, the delivery is dry and boring.

Lanthimos wants to provoke us with this absurdist satire so rich in layers and meaning that it will probably leave you thinking about it long after it is over. Full review on filmotrope. com