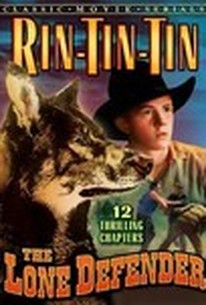 Having basically bankrolled the struggling Warner Bros., the era's most popular canine, Rin Tin Tin, signed a 5,000-dollars-a-picture contract with Poverty Row operator Nat Levine. The result, a 15-chapter serial (Levine demanded hard labor for his shekels), featured Rinty opposite veteran genre star Walter Miller. When Rinty's owner is murdered for his secret gold mine, the dog joins forces with Department of Justice agent Ramon (Miller) to catch the killer. Rinty, inevitably, is soon suspected of having killed a valuable colt and sentenced to death (shades of a previous Rin Tin Tin vehicle, The Night Cry, 1926). He is saved in the nick of time by Ramon and his juvenile sidekick, Buzz (former Western star Buzz Barton). The villain (Robert Kortman) then kidnaps the dog and forces him to reveal the location of the gold mine. Ramon, Buzz, and the dead prospector's lovely daughter, Dolores (June Marlowe of Our Gang fame) manage not only to save the dog once again but also bring the killer to justice. Sold on the states rights market as a "talkie" (or should it be a "barkie"?), The Silent Defender had long, drawn-out silent sequences interspersed with stilted dialogue. But it was packaged solely for children -- who didn't care about sound one way or another -- and made a mint for Levine's burgeoning Mascot Pictures.

Boyd Irwin
as deputy
View All

Critic Reviews for The Lone Defender

There are no critic reviews yet for The Lone Defender. Keep checking Rotten Tomatoes for updates!

There are no featured reviews for The Lone Defender at this time.