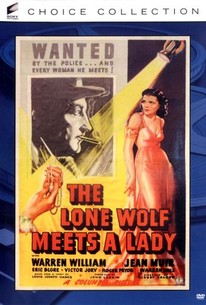 The lady in question in this delightful whodunit is Joan Bradley (Jean Muir), a former secretary who is about to marry her employer's son, Bob Pennison (Warren Hull). Mrs. Pennison (Georgia Caine) graciously lends her future daughter-in-law a priceless necklace, but when Joan returns to her apartment, she is met by what at first appears to be the ghost of her late husband, Rennick (Roger Pryor). He is no ghost -- but very much alive, in fact. Rennick grabs the necklace, shoves poor Joan away, and he's promptly shot and killed by...well, that is indeed the question. Brought into the case by accident (literally), former jewel thief-turned-master sleuth Michael Lanyard (Warren William) must once again cross swords not only with a dangerous criminal but with the ubiquitous foe, Inspector Crane (Thurston Hall). The Lone Wolf Meets a Lady was the third entry in the Lone Wolf series. ~ Hans J. Wollstein, Rovi

Luis Alberni
as Pappakontus
View All

Critic Reviews for The Lone Wolf Meets a Lady

There are no critic reviews yet for The Lone Wolf Meets a Lady. Keep checking Rotten Tomatoes for updates!

There are no featured reviews for The Lone Wolf Meets a Lady at this time.