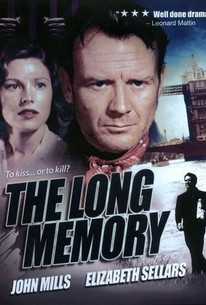 John Mills followed his successful Gentle Gunman with the tensioned-filled meller The Long Memory. Convicted for a murder he did not commit, Davidson (Mills) spends 12 long years in prison. Upon his release, he vows to get even with the three witnesses who perjured themselves and clenched his conviction. Returning to the scene of the crime, he begins gathering clues as to the whereabouts of the witnesses. That's when he discovers that the alleged murder victim is alive and well! John McCallum co-stars as Inspector Lowther, who has spent the past dozen years mulling over the Davidson case, wondering if the man was innocent after all. For the sake of plot convenience, it turns out that Lowther is married to one of the lying witnesses! The Long Memory was based on a novel by Howard Clewes.

Critic Reviews for The Long Memory

There are no featured reviews for The Long Memory at this time.