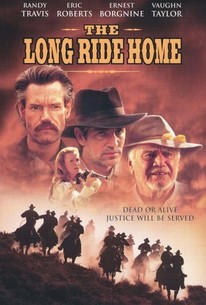 In the New Mexico Territory in 1866, Jack Fowler (Randy Travis) survived the Civil War but barely escapes the drunken rage of a gun-toting idiot who mistakes him for the gunslinger Jack Cole. Compelled to defend himself, Fowler shoots the man dead. Now a posse lead by Lucas Moat (Ernest Borgnine) searches for him to bring him to mistaken justice. Fowler, wounded, ends up at the homestead of Fiona Champyon (Stella Stevens), who just happens to be the gal friend of the sheriff (Eric Roberts). It all comes to an head when the real Jack Cole shows up.

Sam Dolan
as Billy
View All

There are no critic reviews yet for The Long Ride Home. Keep checking Rotten Tomatoes for updates!

There are no featured audience reviews yet. Click the link below to see what others say about The Long Ride Home!