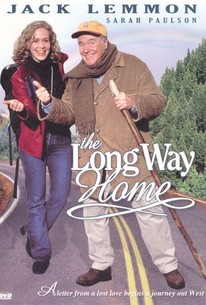 75-year-old retired cabinetmaker Thomas Gerrin (Jack Lemmon) has been a widower for three years, during which time his well-meaning children have insisted upon treating him as a helpless invalid. Determined to prove that the spark of life still burns within him, Thomas impulsively cashes his most recent pension check and heads off for Monterey, California, there to touch base with an old flame (Betty Garrett) whom he hasn't seen in fifty years. En route, he befriends a free-spirted young graduate student named Leanne Bossert (Sarah Paulson). Both agree that any sort of romance would be out of the question: Nonetheless, Leanne is the catalyst for Thomas' new lease on life--and as his children franctically search for their fugitive dad, the May-December "odd couple" encounter all manner of breathtaking adventures and colorful characters. Based on Thomas Guerin, Retraite a 1978 French TV movie starring Charles Vanel, The Long Way Home was produced for the CBS television network, where it was first broadcast on March 1, 1998.

Michael Philips
as Russell
View All

There are no critic reviews yet for The Long Way Home. Keep checking Rotten Tomatoes for updates!

A retired widow leaves his family to go on an adventure and befriends a young woman.