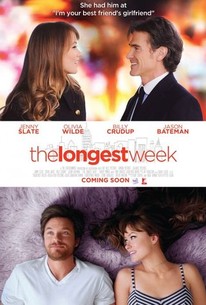 Affluent and aimless, Conrad Valmont lives a life of leisure in his parent's prestigious Manhattan Hotel. In the span of one week, he finds himself evicted, disinherited, and... in love. (c) Gravitas Ventures

Tony Roberts
as Barry the Therapist

Barry Primus
as Bernard the Chauffer

Auden Thornton
as Woman at Gallery

Erika Spring
as Herself

Jessie Gold
as Herself

Jay Israelson
as Himself

News & Interviews for The Longest Week

View All The Longest Week News

Critic Reviews for The Longest Week

Not even the able actors that Glanz somehow managed to rope into his project can do much with the draggy story and the vapid characters that they have been given to play.

Like so many filmmaking wunderkinds who could have used a course in common sense, Glanz is technically assured but emotionally hollow.

It takes effort to turn a movie with a cast as appealing as the one in "The Longest Week" into a grating exercise in narcissism, but writer and director Peter Glanz proves up to the task.

It's clearly the work not of a lazy thief, but of a raw talent who's still struggling to find his own voice. In the meantime, his impressions are pretty darn impressive.

Writer-director Peter Glanz seems determined to make a subpar Wes Anderson knockoff. And in that sense, he has achieved undeniable success.

Lacking any significant character arc or motivation, The Longest Week is little more than a series of insipid conversations between bored aristocrats who snark at each other in monotone.

Despite a nicely chosen cast and a handful of flourishes borrowed from the works of cinematic masters, there's little carbonation to this stale elixir that too often depends on cliché.

Tiresome romcom doesn't live up to promise; some iffy stuff.

Throughout the film, the writing is heady but heartless, as if Glanz means to occupy the intellectual high ground by exploiting tired romantic clichés and passing off his finger pointing as evidence of self-righteousness.

The film's constant nods to the artificiality of its narrative highlight its precious, cloying phoniness rather than subvert it.

A Wes Anderson facsimile that only serves to make you treasure the real thing all the more.

Audience Reviews for The Longest Week

Meh. Doesn't really feel like its own unique film, rather it's a collection of a variety of different styles from other filmmakers. By and large, stylistically, in the way Peter Glanz frames his shots, I'm reminded of Wes Anderson. Thematically it almost seems like a bit of Woody Allen and Noah Baumbach. In short, it's a film that does not have its own identity. It's the very definition of derivative. That's not much of a problem if you tell a good story with the pieces that you have. Clearly, if you haven't noticed yet, this was not a good story. The film makes some reference, through one of its supporting characters in one conversation, to its own narcissistic lead characters and how that makes it hard to relate to any of them or to care about any of their 'struggles' since they never face consequences for any of their actions. Partly, this conversation is in there to make Peter Glanz look like he's a clever writer, in that he's aware this conversation I'm referring to could very easily be describing his own lead characters. And that sort of self-indulgent wankery, felt the need to be redundant, is counter-productive to the story that you would like to tell. The fact of the matter is that Peter Glanz, at least as of now, is not Wes Anderson, Woody Allen OR Noah Baumbach. He's likely never to be any of those three, so why even bother trying to imitate those three? It could be possible that Glanz thought he was making a film that was unequivocally him but it doesn't come across that way in execution. The film isn't even that bad, it's got some interesting pieces, such as the cast, which is probably the best thing about the film, and some insight into the mind of someone that is as affluent as Conrad and his thought-process. But it doesn't do nearly that I found interesting or that I found was actually good. It's not that the lead was unlikable. As long as a character is well-written, or interesting, then it doesn't matter if they're the biggest asshole in the world, at least they're telling a story that I would enjoy. Tying it back to Jason Bateman, Arrested Development has some of the most narcissistic, selfish, racist and unlikable characters in the history of any television series. But the fact that the show was so expertly written, and hilarious to boot, made it work. You don't have to like a character as a 'person' in order to enjoy what they're going through. I just don't think Conrad's arc as a character is something that I really wanted to invest in. Not that it's poorly written, it's just that, by and large, it really has nothing to say. It doesn't change my views on anything. The acting is pretty good, all around, so nothing to complain about on that front. That's, easily, the best part about this film. It's not like it's an all-time great cast, but they do their best with a script that almost cripples them from the start. That's the only reason, and Glanz's technical prowess, this gets two stars. With that said, I do look forward to Glanz's next effort. I think that if he focuses more on being himself, as opposed to be Woody Allen, Wes Anderson or Noah Baumbach, or any other independent filmmaker he may admire, then I think he could make a truly great film. With that said, this isn't terrible, but I wouldn't exactly go out of my way to watch it. You won't be missing absolutely anything of note if you skip this.

If director Peter Glanz turns out to be a good director, this will be a good developmental movie. Glanz takes all the talent this cast has and renders them unimpactful through this hour and thirty minute exercise in directorial ineptitude. The script and setting had a feel that would have made a Wes Anderson type director turn The Longest Week into a successful movie. Instead, Glanz takes a page from Michael Bay and turns it into a mistake of an effort, making an hour and 30 minutes seem like a long time. Bateman's character is made to seem like one type of person, which inevitably has no impact on the relationship. There is nothing surprising, no twists, the reader is insignificant to the story. There are so many things wrong with The Longest Week that there's no reason to bother. There are no magnificent performances worth watching this for. No breakout efforts.