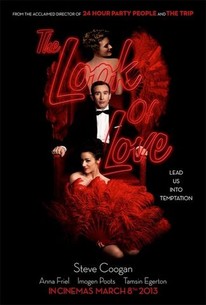 Critics Consensus: While it may not add up to the definitive Paul Raymond biopic -- or take full advantage of Steve Coogan's many gifts -- The Look of Love still proves an entertainingly old-fashioned look at the Swinging London of the 1960s.

Critics Consensus: While it may not add up to the definitive Paul Raymond biopic -- or take full advantage of Steve Coogan's many gifts -- The Look of Love still proves an entertainingly old-fashioned look at the Swinging London of the 1960s.

Critic Consensus: While it may not add up to the definitive Paul Raymond biopic -- or take full advantage of Steve Coogan's many gifts -- The Look of Love still proves an entertainingly old-fashioned look at the Swinging London of the 1960s.

The Look of Love Photos

The true tale of British adult magazine publisher and entrepreneur Paul Raymond (Steve Coogan of "24 Hour Party People", "The Trip"). A modern-day King Midas, Raymond became one of the richest men in Britain - at the cost of losing those closest to him. (c) IFC

News & Interviews for The Look of Love

View All The Look of Love News

Critic Reviews for The Look of Love

Although it wants to be a tragedy - I could feel it straining at the leash to go in that direction - it never quite pulls it off, so to speak.

It's a cracking true story and the cast, including an impossibly free-spirited and leggy Tamsin Egerton, are outstanding but beneath the smart one-liners, frustratingly little is laid bare.

Coogan's own impersonation is precise, but the melancholy that finally engulfs Raymond is beyond him.

Double-billing comic and tragic tones, the biopic "The Look of Love" follows a father and a daughter over three decades in London's swinging Soho.

Director Michael Winterbottom and screenwriter Matt Greenhalgh provide the essential outline of Raymond's story, but they're a little too preoccupied with its glitzy aspects.

The Look of Love is deserving of a look, but don't be surprised if there aren't more than a few similarities between other tales told before.

This biopic of property magnate and pornographer Paul Raymond is mildly entertaining at times and does raise a few cheap chuckles, but it's as shallow as a Soho puddle after a spring shower.

If [Michael Winterbottom] wanted to drain the Soho smut industry of all nostalgic glamour and fun, then he's succeeded.

The Look of Love comes off as an extremely standard biopic that seems to have emerged directly from a template for such films...

Coogan is adept at playing the cad, but Winterbottom gives him little else to do.

Audience Reviews for The Look of Love

In 1992, burlesque and porn entrepreneur and very, very wealthy man Paul Raymond(Steve Coogan) mourns the death of his daughter Deborah(Imogen Poots). In thinking back, he returns to one of his earliest ideas which was to have a lion taming act in a cage with two topless women.(I didn't say it was a great idea...) When his wife Jean(Anna Friel) has to take over for one of the women who sensibly has second thoughts, she sues a newspaper over a dispute about how little she was wearing at the time. With that bid of notoriety to their name, it is only up, up and beyond for the Raymonds. What makes their marriage work is an arragement that Paul can have sex outside of marriage. However, the same cannot be applied to love which is what happens when Paul meets Amber(Tamsin Egerton), nee Julia, when she auditions for one of his productions. As racy a movie as it is, "The Look of Love" is really not about sex nor is it concerned with drugs. Rather, it makes a very well-developed case for moderation in all things, as exemplified by the scenes at the sweet shop. For example, swingers do not make the best of parents. But as stimulating as it can be to review a recent history of erotica, two key performances do not hold up under scrutiny and with them go the movie. No matter the different hairstyles, Steve Coogan is still Steve Coogan doing impressions in a restaurant. And even more importantly, while Imogen Poots has done fine work elsewhere, here she does not have the requisite impact to be fully successful as the emotional core of the movie and the only character who tragically fails at reinvention.

When we first meet Paul Raymond (Coogan) in the late fifties, he and his wife Jean (Friel) are touring England with a gimmicky nude circus act. After a tabloid newspaper incorrectly states that Jean appears nude in these shows, Raymond wins a substantial libel settlement. He uses the winnings to open the Raymond Revue Bar, which quickly becomes the lead attraction of Soho, London's red light district. The film follows Raymond through the seventies and eighties as he builds an empire of sex clubs and porn magazines, focusing on his tumultuous relationship with both his model girlfriend Fiona Richmond (Egerton) and his drug-addled daughter Debbie (Poots). The biopic film is a difficult genre, one which rarely produces satisfying results. The best biopics choose to focus on a particular moment or aspect of their subject's life. Tim Burton's 'Ed Wood' is a perfect example of a film which focuses on celebrating its subject's best years. Had Burton taken the usual biopic route, as Winterbottom does here, the second half of his film would have been a depressing tale of Wood's downward spiral into drug addiction. There's a strange level of begrudgery involved in most biopics, aimed, as they so often are, to appeal at the primitive jealousy we feel towards the rich and famous. These films take great delight in building up a successful figure, only to knock them down in the final act. Why choose to focus on a famous person's human flaws rather than the achievements which brought them such fame? Winterbottom's film adopts this crude tactic, all champagne popping montages in the first half, drug-addled paranoia and self-destruction in the second. We've seen this a million times before, with far more interesting subjects. Raymond's character is pretty unremarkable and Coogan does him no favors with his portrayal, indistinguishable from any other character the former comedian has played. The real star of the show is Poots, stealing every scene she appears in. By the end of 2013, this girl's name will be on everyone's lips. Friel is also impressive, perfectly capturing the new-money crassness of her character. Winterbottom has become the U.K's Stephen Soderbergh, churning out films at an incredible rate. He began his career with a series of interesting works but, like his U.S counterpart, he seems to be coasting on auto-pilot now. Maybe a Soderbergh-esque break is in order?

The Look of Love Quotes