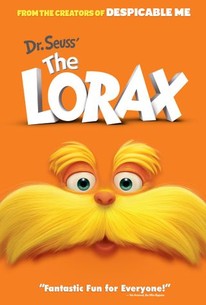 Critics Consensus: Dr. Seuss' The Lorax is cute and funny enough but the moral simplicity of the book gets lost with the zany Hollywood production values.

Critics Consensus: Dr. Seuss' The Lorax is cute and funny enough but the moral simplicity of the book gets lost with the zany Hollywood production values.

Critic Consensus: Dr. Seuss' The Lorax is cute and funny enough but the moral simplicity of the book gets lost with the zany Hollywood production values.

The 3D-CGI feature Dr. Seuss' The Lorax is an adaptation of Dr. Seuss' classic tale of a forest creature who shares the enduring power of hope. The animated adventure follows the journey of a boy as he searches for the one thing that will enable him to win the affection of the girl of his dreams. To find it he must discover the story of the Lorax, the grumpy yet charming creature who fights to protect his world. -- (C) Universal

Danny DeVito
as The Lorax

Ed Helms
as The Once-ler

It looks bright and clean and sharp. But there is no charm or life.

When a film misses the point as cretinously as The Lorax does, it really gets the blood up, although perhaps the lesson to learn here is simply that Seuss's aesthetic resists a cinematic treatment.

Amidst all the padding and razzle-dazzle 3D CGI, the Lorax himself and his grumpy admonitions are pushed to the margins - but the Once-ler's musical number 'How Bad Can I Be?' operates as an anthem for the self-serving, cynical casuistry of our own times.

About as factory-produced a film as it's possible to make about the evils of commercialism, while the bulbous, Haribo-hued animation style reflects none of Seuss's visual wit.

It's hard to imagine children not enjoying the film.

In the hierarchy of good-to-great kid movies, this would rank somewhere straight down the middle. It's a safe and easy kind of entertainment, and that's about it.

For what little goes right, there's so much going wrong. Many preachy montages, and the odd cheesy song.

The man otherwise known as Dr. Seuss has been injured by Hollywood.

A storybook come to life. It works really well thanks to the keen visual eyes of Renaud and Balda.

Its execution lacks a great deal of finesse and too often opts for methods that cheapen the overall didactic in favour of Hollywood thrills and spills.

Based extremely loosely on the Dr Seuss story of the same name and as usual with Hollywood they have fudged it all up. The story is an environmental one, an eco plot if you will about the effects of cutting down trees. Put simply (just like the original book did) there is a small town which is gloomy and polluted. The reason for this is because all the trees were chopped down to mass market 'thneeds' by the one they call 'Once-ler'. Once-ler tells a young boy the whole story of how he destroyed all the trees to create his thneeds and ignored the advice and warnings of the Lorax, guardian of the trees. Once-ler regrets his actions and gives the young boy a tree seed to plant so that trees may return as well as the Lorax. There is a bit more to it but that is the basic premise. So what does Hollywood do you ask? well do you really need to ask? I'm sure you can all guess but I'll tell you anyway. Hollywood strips the story down and refits it with tripe filler and made up characters to fill out a decent length run time. Throw in some ridiculous vehicle chase sequences, cliched slapstick and jokes and some hideous musical numbers and there you have it, typical Hollywood trash. Now I will admit the film looks lovely, full of bright bold colours, its cheerful, light-hearted and with some nice CGI animation. BUT the lesson has been diluted and cluttered by fancy ass visuals and 'action' sequences. Yes there is still a nice message within the film, the finale shows what can be done if they jettison the crapola but that's only about a 3 minute sequence out of an entire film! I simply cannot understand why they thought to create new characters! The new character Aloysius O'Hare is REALLY annoying too, he just looks annoying, making him short...yeah that's not funny. I realise they needed to fill the story to reach a reasonable film run time but if that can't be done then don't do it. Maybe try another route, don't just make a whole load of stuff up! Once-ler was suppose to be faceless, a boogieman like equivalent of modern faceless companies/corporations that destroy nature for their gain. You can't uproot that, that's the whole point! The world where this takes place isn't named, plus it isn't some bright, colourful, 'Willy Wonka' type place with fancy technology!! I see what they did with that sure, but why?? stop changing the whole premise!! it all looks like something outta 'Despicable Me'. Of course we don't know how Seuss would take to it but I'm pretty sure the original fable wasn't meant to include futuristic vehicles, buildings, Once-ler playing guitar, airship things and some god awful songs including the now obligatory hip hop pop song for the final credits which happens for almost all kids films now (more manufactured faceless nobodies singing forgettable songs that will fade into obscurity as quickly as they appeared). I like the fact that Hollywood has tried to put across a good message...of sorts. I'm sure they are more concerned about another franchise to milk that will rake in the moolah but the initial positive effort is there. If only this could of been done more down to earth, with a little more sense towards the source material and maybe in a different media (stop motion would have been nice, Selick directing perhaps?). At the end of the day its merely been mutated into another flashy, churned out, in your face CGI flick (in 3D...ugh!). How ironic, a polluted vision of Dr Seuss' simple little tale, such a shame. Ignore this, stick to the original book or 1972 TV special, don't deny your children these.

Another good story from Dr. Seuss. Good movie for kids, but still makes adult person to realize something.

"The Lorax", colorfully animated and wonderfully exuberant, does a great job conveying a Dr. Seuss-esque world, but like always, Hollywood always needs to dumb down the main core of what made the source material such a classic: the message. Instead, Hollywood has managed to fluff the presentation and everything about its style to, altogether, cater to "children's needs". The book, undoubtedly, does a better job, but nevertheless, this film isn't too bad. It's a good time, but I recommend reading the book to your children first before watching an above-average Dr. Seuss adaptation.