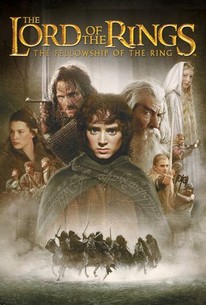 Critics Consensus: Full of eye-popping special effects, and featuring a pitch-perfect cast, The Lord of the Rings: The Fellowship of the Ring brings J.R.R. Tolkien's classic to vivid life.

Critics Consensus: Full of eye-popping special effects, and featuring a pitch-perfect cast, The Lord of the Rings: The Fellowship of the Ring brings J.R.R. Tolkien's classic to vivid life.

Critic Consensus: Full of eye-popping special effects, and featuring a pitch-perfect cast, The Lord of the Rings: The Fellowship of the Ring brings J.R.R. Tolkien's classic to vivid life.

Assisted by a Fellowship of heroes, Frodo Baggins plunges into a perilous trek to take the mystical One Ring to Mount Doom so that it and its magical powers can be destroyed and never possessed by evil Lord Sauron. The astonishing journey begins in the first film of director/co-writer Peter Jackson's epic trilogy that redefined fantasy filmmaking. This imaginative foray into J.R.R. Tolkien's Middle-earth won 4 Academy Awards (R)* and earned 13 total nominations including Best Picture.

Christopher Lee
as Saruman the White

Timothy Bartlett
as A Hobbit

Bruce Spence
as Mouth of Sauron

Andy Serkis
as Gollum
View All

Jackson is working from obvious passion; he knows the most special of effects are expected of him but deploys his technology smartly.

Most ambitiously, this rousing adventure closes with an ending that's closer in spirit to an art-house film than a popcorn holiday romp.

An enthusiastic visionary set loose on one of the biggest playgrounds ever constructed, Jackson brings more personality to the series' first installment, The Fellowship Of The Ring, than typically seeps into a franchise of this magnitude.

The New Zealander director Peter Jackson, who wrote the screenplay with Fran Walsh and Philippa Boyens, works with enough dramatic tension and pictorial grandeur to sustain us through long periods of complicated exposition and heavy bouts of swordplay.

If Fellowship hasn't rescued an otherwise dreadful year, it at least gives us something to look forward to -- same time, next year.

There's still an organic, made-in-Jackson's-backyard feel to some of the battle and character scenes.

I'm sure you can smell the nerdy fan-girl coming from this review but it is a film I genuinely love and was thrilled to rewatch for this challenge.

Peter Jackson throws you onto the battlefield with your favourite characters.

Well balanced and stimulating, the film alternates between intense action, light comedy, and sincere drama (a few moments are even reserved for romance).

Peter Jackson's epic adaptation is an impressive beast of a film that will steal your heart every time. It grabs you with its sense of urgency, huge scope and hope. The beginning to one of the best movie trilogies of all time. [Full review in Spanish]

Audience Reviews for The Lord of the Rings: The Fellowship of the Ring

A great start to one of the greatest film adventures of our time, 'The Fellowship of the Ring' sets a high standard for the rest of the saga. Taking great strides in character development and the story line, the first installment of the series proves to be well made, beautifully shot, and filled with exhilarating action pieces.