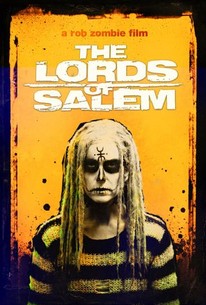 Critics Consensus: The Lords of Salem has lots of atmospheric portent, but it's unfortunately short on scares.

Critics Consensus: The Lords of Salem has lots of atmospheric portent, but it's unfortunately short on scares.

Critic Consensus: The Lords of Salem has lots of atmospheric portent, but it's unfortunately short on scares.

The Lords of Salem Photos

From the singular mind of horror maestro Rob Zombie comes a chilling plunge into a nightmare world where evil runs in the blood. The Lords of Salem tells the tale of Heidi (Sheri Moon Zombie), a radio station DJ living in Salem, Massachusetts, who receives a strange wooden box containing a record, a "gift from the Lords." Heidi listens, and the bizarre sounds within the grooves immediately trigger flashbacks of the town's violent past. Is Heidi going mad, or are the "Lords of Salem" returning for revenge on modern-day Salem? (c) Anchor Bay

John S.
as Halvard the Guardian

Daniel Roebuck
as Frankenmonster
View All

News & Interviews for The Lords of Salem

View All The Lords of Salem News

Critic Reviews for The Lords of Salem

Polished and calculated, this is a nerve-shattering fright fest bolstered by immaculate technique.

It's a credit to Zombie's interest in growing as an artist that he's drawing from more mature inspirations here, but it's also part of why the movie doesn't work.

It's all meant to be monstrous, unspeakable, blasphemous horror but it comes across more like a slightly dirty drawing, passed in seventh-grade religion class.

Movies by Rob Zombie, the goth rocker turned cult filmmaker, aren't for everybody. But he couldn't care less.

It's a head trip, to be sure, but it's Zombie's electric, haunted head, so my advice is just sit back and goggle.

Considerable care goes into establishing the premise, but the film eventually abandons psychological subtlety for hallucinatory garishness, which is too bad.

Rob Zombie at his most restrained in this dread-filled, trippy little film. Naysayers should definitely give this one a chance.

The Lords of Salem is an exciting change of pace for Rob Zombie, and his latest proves a little ingenuity can go a long way.

A fun take on rock 'n' roll as the devil's music, with momentary flashes of brilliance.

Like Zombie the musician, Zombie the director is all style and no substance.

Nevertheless, hallucinatory hogwash such as Salem will continue to dog Zombie as a campy conductor of sluggish horror-oriented hogwash.

For me, The Lords of Salem is unequivocally Rob Zombie's greatest achievement as a filmmaker to date. Don't get me wrong, I have a deep-seated love for many of his other films, but there is something about Lords that just hits me deep in my soul.

Audience Reviews for The Lords of Salem

Great atmosphere and imagery. The scene in the kitchen made me jump. Salem is a great spooky setting. Not much seemed sacrified because Heidi had already invited Satanic forces into her life and her radio show. The concept of the Lords and their evil song was cool. The modern day witches were really effectively evil. The backstory was good. It's a bit of a shame all that calculated buildup was dumped at the end and forgotten.

[Zero Stars] Rob Zombies' brand of atavistic, 70's-era throwbacks to the horror of yesteryear is an acquired taste. For as refreshingly old-school and grungy as 'The Devil's Rejects' was, his 'Hallowee' remake was a platitudinous, unintentionally funny flatliner. Which brings me to 'The Lords of Salem' which I can safely assume (or hope) is the worst film that Zombie has been associated with. For one thing, the character depth of Heidi as a recovering junkie is superficial at best with truncated scenes of her as a support group to indicate her struggle. Zombie is completely clueless about minute details like how a small-radius radio station works with Heidi and her deejay friends using obnoxious sound effects ad nauseum and playing unsolicited records. The phantasmagorical imagery is putrid and avant-garde (ranging from a midget with flailing intestines and Heidi bucking atop a goat). Although it has been touted as "blazingly original", the trajectory of the story with a vessel for Satan's birth has been tread dozens of times before. The acting from Meg Foster as the coven leader is cringe-inducing and hammy. The pacing is plodding to the point of boredom. From concept to execution, 'The Lords of Salem' is a solemnly self-serious, excruciating piece of drek that ranks as one of the worst movies of the year.

"The Lords of Salem" is the horror film equivalent of 101 minutes of foreplay with no payoff. And while I do appreciate the hyper-creepy and very potent atmosphere which writer/director Rob Zombie creates throughout, it still doesn't change the fact that the story is D.O.A and the visuals are all over the place. "The Lords of Salem" is unfortunately what happens when Rob Zombie has a semi-interesting idea, but is given full control. Side Note: The fact that Sheri Moon Zombie (Rob Zombie's wife) has to be in every one of his films lets you know the caliber of acting here. But allow me to bypass that flaw for a second, while I address the more prevalent hindrances which keep "The Lords of Salem" from being the blasphemous mind f**k it should have been. Synopsis: This predictable "Rosemary's Baby"-esque plot concerns a female radio DJ living in modern day Salem, Massachusetts, whose life, after playing a song by a mysterious band called The Lords (which is undoubtedly the creepiest aspect of the film) becomes intertwined with a coven of witches. Zombie's filmmaking flaws are the same as they've always been. His dialogue is at times cringe inducing and his stories aren't very deep. In saying that, "The Lords of Salem" may be the purist Zombie film he's ever made. And while lovers of "The Devil's Rejects" may be intrigued by this, these same people will undoubtedly be disappointed when it is discovered that "The Lords of Salem" has a greater issue than just a flawed story and campy dialogue. The real issue with "The Lords of Salem": There are a few films in the "history of film" which can be said to contain stunning looking sequences and still be considered terribly flawed or downright unwatchable movies. The number #1 example of this would be Stanley Kubrick's "Eyes Wide Shut", and maybe #2 would be, um, I don't know..."Beasts of the Southern Wild" or something like that. Anyway, an argument could (and should) be made for "The Lords of Salem" being in the top 10 of said list. This film contains sequences which had me in awe, but then comes Sherri Moon with dread locks, riding a goat, followed by then another scene which looks unbelievably beautiful and then comes masturbating zombie priests. The entire movie is like that. Uneven, nonsensical visuals are thrown in the audience's direction like it's the thing to do, even when their symbolisms don't seem to be understood by anybody but Zombie himself. Also, Zombie's obsession with grotesque nudity plays a reoccurring role, early and often, as naked witches (in other words, naked old ladies) bombard the screen for long stretches. And "ain't nobody got time for that!" Most of this film is filled with unpleasant imagery that is more repulsive than scary. But, as I alluded to before, Zombie does succeed masterfully in creating a horror film that for almost 90 minutes of its 101 minute runtime is pretty much all suspense; with a creepy atmosphere that had my skin crawling. To this I will say that Zombie has evolved into a "real director" who will (from time to time) come through with some masterfully constructed shots which are aesthetically quite impressive, but that still doesn't mean anybody should be subjected to the rest of "The Lords of Salem", which is for the most part a silly little film. Final Thought: Zombie has always displayed an obvious love for cinema (hell, in this film there is a huge mural of an infamous scene from "Le voyage das la lune" on the wall of the protagonist's bedroom) and "The Lords of Salem" may be his most visually advanced film yet, but the bland storyline, clunky script and lack of scares in conjunction with the weirdest visuals of any horror film in recent history, will be the reason this film will lose a lot of its audiences way before the arrival of the demonic chicken baby in the third act. So, while there is "something" here, I can't (in good conscious) recommend that anyone sit through "The Lords of Salem" unless you are interested in wading through some intense weirdness, for only about five absolutely stunningly filmed sequences. In the end, as misguided as "The Lords of Salem" was, my consensus is still: Rob Zombie the director is still better than Rob Zombie the musician. Written by Markus Robinson, Edited by Nicole I. Ashland Follow me on Twitter @moviesmarkus

The Lords of Salem Quotes