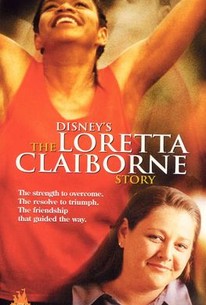 Made for television, The Loretta Claiborne Story was the fact-based saga of a mentally and physically handicapped young woman who fulfilled her dream to excel at track and field. Despite the unstinting support of her overworked and underpaid mother, Rita (Tina Lifford), Loretta (Kimberly Elise) is besieged by innumerable obstacles en route to her goal, roadblocks mostly created by callous, indifferent, and downright hostile "normal" people. But with the additional urging of compassionate, no-nonsense social worker Janet McFarland (Camryn Manheim), Loretta not only triumphed at the Special Olympics, but also at the Boston Marathon. Her achievements are ultimately given their highest accolade when Loretta wins the 1996 Arthur Ashe Award for courage. The Loretta Claiborne Story debuted January 16, 2000, as an episode of ABC's Wonderful World of Disney anthology.

Evan King
as Sam
View All

There are no critic reviews yet for The Loretta Claiborne Story. Keep checking Rotten Tomatoes for updates!

There are no featured audience reviews yet. Click the link below to see what others say about The Loretta Claiborne Story!