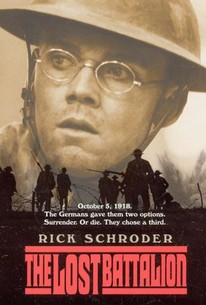 Based on a true story, the made-for-cable feature The Lost Battalion is set in 1918 during the final months of WWI. Assigned to capture an enemy stronghold in Charlvaux at the height of the Argonne campaign, the men of the AEF 308th Battalion, 77th Division, are led by young American major Charles Whittlesey (Rick Schroder), an inexperienced but dedicated "citizen soldier." Totally cut off from the other allied troops, unaware of their vulnerability, and barraged by "friendly fire," the 500-plus men of the 308th bravely hold their position, suffering incredible losses and unspeakable deprivations in the process -- while the battalion's superior officers, far from the firing line, callously prepare to write off the men as expendable casualties. Fairly graphic and horrifying by basic-cable standards, The Lost Battalion was filmed on-location in Luxembourg, and made its American TV debut courtesy of the A&E Channel on December 2, 2001.

Critic Reviews for The Lost Battalion

There are no critic reviews yet for The Lost Battalion. Keep checking Rotten Tomatoes for updates!

Audience Reviews for The Lost Battalion

well made and rare starring role for schroder who actually creates a character of remorse & bravery. the film basically missed the masses and has since had to find its audience through dvd. Russell Mulcahy is normally a hack of a director but he does a superb job here. one of the better war films