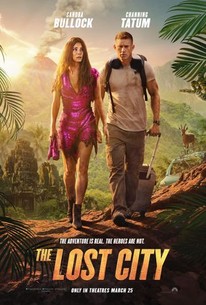 While on a publicity tour for her latest work, Loretta Sage (Sandra Bullock), a talented and hermit-like adventure-romance novelist, becomes embroiled in an outlandish scheme concocted by eccentric billionaire Fairfax (Daniel Radcliffe) intent on finding the ancient civilization detailed in Loretta's newest novel. Meanwhile, the charming yet vapid Alan (Channing Tatum), who models for Loretta's book covers, vows to prove his real-life heroism matches his fictional alter-ego and embarks on a harebrained mission to rescue Loretta. Aaron Nee and Adam Nee co-direct the action-comedy.

News & Interviews for The Lost City

View All The Lost City News

Critic Reviews for The Lost City

There are no critic reviews yet for The Lost City. Keep checking Rotten Tomatoes for updates!

There are no featured reviews for The Lost City at this time.