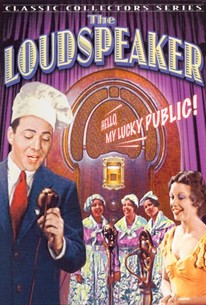 Perhaps the best of Monogram's breezy Ray Walker vehicles, The Loudspeaker casts Walker as Joe Miller, a cocky would-be radio star. Armed with a minimum of talent and a maximum of chutzpah, our hero lands a job as emcee of a network radio program sponsored by "pancake king" Burroughs (Spencer Charters). Success rapidly goes to Miller's head, whereupon he loses the affections of his automat-employee sweetheart Janet Melrose (Jacqueline Wells). Forced to eat several heaping helpings of humble pie, Miller finally shows he's a swell guy underneath. Radio fans will enjoy the brief spoofs of Ed Wynn and The Boswell Sisters, while film buffs will have fun spotting such familiar faces as Mary Gordon and Rychard Cramer among the bit players. Worth the admission price in itself is the bizarre radio-studio set, dominated by a huge caricature of an Aunt Jemima-style "mammy," complete with moveable eyes!

Lawrence Wheat
as Thomas
View All

Critic Reviews for The Loudspeaker

There are no critic reviews yet for The Loudspeaker. Keep checking Rotten Tomatoes for updates!

There are no featured reviews for The Loudspeaker at this time.