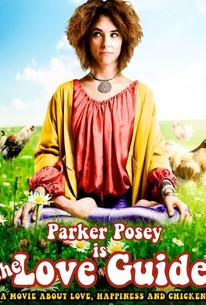 Parker Posey. As the stress of their failing chicken farm takes a toll on their once-happy relationship, Millie (Christy Scott Cashman) and Al (Jay Harrington) receive an unusual offer that could help to patch up the holes in their troubled marriage. Ambitious reality television producer Ira (Michael Panes) sees them as the perfect participants for "Cut the Crap", a reality series in which free-spirited yogi Angela Lovecraft (Posey) uses her mystical skills to help people through hard times. But when the cameras start to roll, Ira realizes that the show isn't working. Determined to make "Cut the Crap" a hit, he convinces Millie that Al is being unfaithful, effectively expanding the cracks in the couple's rapidly-deteriorating relationship. Meanwhile, Angela focuses all of her New Age energy on keeping Al and Millie together, and learns a little something unexpected about herself in the process. ~ Jason Buchanan, Rovi

Critic Reviews for The Love Guide

There are no critic reviews yet for The Love Guide. Keep checking Rotten Tomatoes for updates!

Audience Reviews for The Love Guide

There are no featured audience reviews yet. Click the link below to see what others say about The Love Guide!