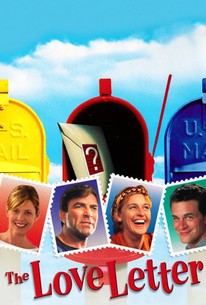 Helen (Kate Capshaw) runs a bookstore in Loblolly By The Sea, a small fishing community in New England where everyone seems to know everyone else's business. A 42-year-old single mother, she is emotionally distant and fearful of getting too close to anyone. George (Tom Selleck) has known Helen since they were schoolmates, and he's been in love with her for ages, but has always settled for just being her friend. Convinced she wasn't interested in him, he married another woman years ago. Helen also has another secret admirer, Johnny (Tom Everett Scott), who isn't at all put off by the fact that Helen is twice his age. Johnny, however, is currently occupied with Jennifer (Julianne Nicholson), a fellow student who also works at the bookstore and is crazy about him. Into this tangled web of unrequited love comes an amorous letter that Helen finds in the store one day. The letter bears no signature and no address; it's at once passionate and oblique, fervent and cryptic. It's very interesting stuff. So who wrote it? And to whom was the writer planning to send it? Before long, the letter has made its way through this circle, and everyone has an idea (or a hope) of who their secret love is, although no one knows for sure or just how to find out. The Love Letter marked the American debut of director Peter Ho-Sun Chan, who enjoyed success in Hong Kong with Comrades: Almost A Love Story and He's A Woman, She's A Man. The supporting cast includes Ellen DeGeneres, Blythe Danner, and Gloria Stuart. The Love Letter may be best remembered as the only major studio film to open the same week as Star Wars: Episode One -- The Phantom Menace. ~ Mark Deming, Rovi

Sasha Spielberg
as Girl with Sparkler

Marilyn Rockafellow
as Vivian
View All

Critic Reviews for The Love Letter

The Force isn't with, nor is there much dramatic force behind The Love Letter!

It wants to revel in rapture and grand illusions and timeless dreams, yet its vision of love is overly graphed out and willed.

A romantic comedy of much charm and wisdom!

Filled with surprising bursts of wit and charm!

The Love Letter transports the recipe from Hollywood to New England and turns it into the kind of flavorful clambake that defines summer escapist entertainment.

To call this 'a romantic comedy-drama' is to imply an involving emotional core and a witty sense of humor that simply aren't there.

A piece of tasty meringue to enjoy!

"Do you know how in love with you I am? Did I trip? Did I stumble? Lose my balance, graze my knee...graze my heart?"

An enjoyable enough way to spend an hour and a half, but doesn't end up having much to offer in the way of substance.

Choosing not to emphasize the romantic angle, the film feels more like a pilot for a television sitcom than a movie.

The Love Letter is so slight, so insipid, that a viewer can scarcely find much therein to love or hate.

Audience Reviews for The Love Letter

I actually enjoyed this movie. I admit I did have to start it over once about 10 minutes into the movie because I wasn't really paying attention and so I didn't know what was going on. The character of Johnny did make me uncomfortable though with how posessive and pushy he seemed to be. It certainly wasn't a brilliant movie but it was quirky.

Just okay. I watched for Ellen and Tom Selleck and they were both very loveable.