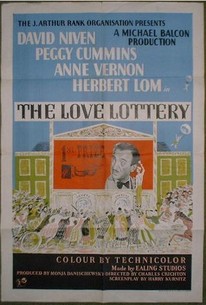 David Niven returns to his native England to star in the frothy comedy The Love Lottery. Niven plays a Hollywood movie star who is the "prize" in a lottery dreamed up by his press agent. The lucky lady who "wins" Niven will be able to spend a week in his company. Sensing the silliness of the whole enterprise, Niven promises publicly to marry the winner--and that's where starry-eyed fan Peggy Cummins enters the proceedings. Herbert Lom is the film's fly in the ointment, dogging Niven's trail to Italy to make certain that he keeps his promise. There's an amusing celebrity cameo in The Love Lottery, but to reveal the identity of the film's "special guest star" might spoil the viewer's fun. ~ Hal Erickson, Rovi

Humphrey Bogart
as Himself

Critic Reviews for The Love Lottery

There are no critic reviews yet for The Love Lottery. Keep checking Rotten Tomatoes for updates!

There are no featured reviews for The Love Lottery at this time.