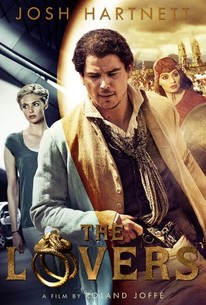 Great Barrier Reef, 2010. After a dangerous dive to save his wife while exploring an 18th century merchant ship wreckage, Jay Fennel, a rugged and attractive marine archaeologist lies brain dead in a Boston hospital. Jay's dream-like coma takes us back in time to Pune, India in 1778. The Brits are invading the palaces and a young British captain named James Stewart (who bears a striking resemblance to Jay) is about to embark on a dangerous mission. Along the way he encounters murder, deceit, betrayal and revenge. He falls deeply in love with an Indian She-warrior named Tulaja- an impossible love which he must fight for.Only the power of a ring can transcend time and save a life. -- (C) Official Site

Rajesh Vivek
as Bandit
View All

Critic Reviews for The Lovers

As one of the film's many forgettable characters so eloquently puts it, "This stinks worse than an oyster's fart."

There's a veil of artifice clinging to every aspect of "The Lovers," a thoroughly unconvincing time-traveling epic costume drama pairing a miscast Josh Hartnett and Bollywood beauty Bipasha Basu.

Time may bring good things to light, but the 2010 copyright suggests that delays have worked no such wonders for this film.

It's so deadly and unintentionally funny (I hope) that it practically defies description. Mr. Joffé should go back to film school as soon as possible.

It's hard to root for love to bloom between a stock Strong Female Character and the nicest man in history.

If you're aching to see a tragic tearjerker romance, then the only tears you will shed will be of frustration.

A slew of half-baked characters and a derivative, white-man-in-a-foreign-land plot line make it hard to recommend, despite a handful of inspired moments.

Joffe seems well aware that this is a story not worth telling ... the filmmaking is so hopelessly uninspired that Hartnett's Scottish accent is somehow not its most glaring flaw.

Shawn Hazelett
Under the Radar

Flailing through centuries, it lacks any meaningful connection between the two timelines.

[The Lovers] strives mightily to be a new Titanic for the Millennium [...]but resoundingly fails at every turn.

Instead of evolving into intriguing lunacy, "The Lovers" loses a critical battle with coherency.

Audience Reviews for The Lovers

There are no featured audience reviews yet. Click the link below to see what others say about The Lovers!