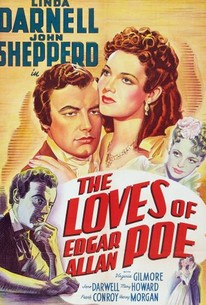 John Shepperd, later known as Shepperd Strudwick, stars as the tragic Edgar Allan Poe in this low-budget biopic. Adopted as a child, Poe grows into a directionless adult, disgracing himself and his foster family through his inability (or unwillingness) to conform to the status quo of 19th century Baltimore. Devastated by the loss of his childhood sweetheart, Elmira Royster (Virginia Gilmore), he finds solace in his marriage to his cousin Virginia Clemm (Linda Darnell). Poe's blossoming literary reputation, and the stability of his private life, are ultimately done in by his addiction to alcohol and drugs. Sixty-seven minutes simply isn't enough time to do justice to this fascinating, complex individual, but everyone involved tries hard. ~ Hal Erickson, Rovi

Arthur Shields
as Somes, the Proctor

Leon Tyler
as Boy
View All

Critic Reviews for The Loves of Edgar Allan Poe

There are no critic reviews yet for The Loves of Edgar Allan Poe. Keep checking Rotten Tomatoes for updates!

There are no featured reviews for The Loves of Edgar Allan Poe at this time.