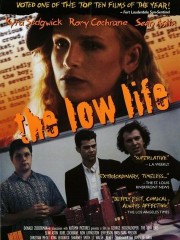 Jamie B
May 24, 2009
Well I can see why no one else has seen this. Kyra Sedgwick is as bafflingly obnoxious as always. Something about that woman just annoys the fuck out of me regardless of what she plays or how she plays it. It just dawned on me: She's the female version of Nicolas Cage, who I also loathe for reasons I'm still incapable of explaining. It all suddenly makes sense!

James R
September 6, 2008
I'm not sure what it is that make people admire and relate to movies about failure. Well, wait, I take that back. People like to watch other people fail because doing so let them indulge either their sadistic schadenfreude ("these people fail in the ways I don't") or their masochistic melancholy ("these people fail in the same ways I do"). What I really don't get is the appeal of watching movies where the failure is unmitigated by success or redemption of any kind, where the attempt of art to mirror life mistakenly becomes a portrayal of only the negative side of that life.
The main characters of The Low Life are a collection of slackers, misfits, and also-rans who, upon finding that life (or Los Angeles) was not going to hand them their dreams on a silver platter, decide to settle for passionless, boring and unambitious existences. Would-be-writer John (Rory Cochrane) is emotionless and withdrawn, his friends complain like whining children, and his potential love interest can't or won't remove herself from an unending cycle of rich but creepy potential husbands whom she could never really love. Nearly everyone in the movie is self-absorbed to the point of near-blindness. And the one character who manages to stay unselfish and positive in the face of his own failures--John's roommate Andrew (Sean Astin)--is not only socially maladjusted to the point of annoying everyone, but is eventually killed in a random car wreck and mourned by all of three people, his parents and John.
There have been other movies that explore the hopeless grind of an unfulfilling life or the frustration of dreams that just won't come true, and been successful and popular in doing so. But most of those movies were either supposed to be funny (Office Space), redemptive (American Beauty), or both (Swingers). The Low Life had the benefit of a strong cast (Astin and Kyra Sedgewick are two bright spots), but its characters' blase negativity, bitter boredom, spoiled whining and unsatisfying routines end up making the audience almost as bored as they are.

Jacob F
July 30, 2008
This film is the embodiment of generation x independent cinema, with it's witty dialogue, underlying sense of complete hopelessness and it's gritty depiction of life in LA.Astin gives a career defining performance, balanced perfectly by the emotionless acting of Cochrane. Everyone who is under the age of twenty two should watch this movie.

mark s
May 9, 2008
This is one of the worst movies i have seen to date, the best part was Christian J. Meoli ... Leonard attempting to act jumping up and down outside the bar, kind-of like i wanted to do on the DVD, to spare the rest of humanity the agony of watching this shitty film. It has a great cast so you keep watching waiting for it to get good, i mean with Sean Astin ... Andrew (played his part perfectly, did a great job, too bad it was in this film), Kyra Sedgwick ... Bevan, Ron Livingston ... Chad, Renée Zellweger ... Poet (they put her name on the cover she has a total of 1 line and less then 4 seconds in the whole movie...

If the cast had any dignity, they would go out and buy all the copies of this film and burn them along with Writer / Director George Hickenlooper and Writer John Enbom

was interested to see cuz i like off-beat movies. this was depressing and frustrating, however the acting was good

James H
March 22, 2008
It's certainly not a cheery feel good movie, and it all seems rather pointless. The acting is pretty good, but the film is just not involving because the characters are shallow and not particularly likeable.

The film is flawed, but manages to keep your interest. The seedy drug underworld is effectively rendered and the the subplots mostly work. Val Kilmer is an underrated actor with an erratic career, but he does a nice job here. Vincent D'Onofrio is memorable (if not over-the-top) as the noseless drug kingpin. It may not be "Requiem For a Dream" meets "Memento" but at least it's not "Spun".

Chris Pratt (Gordon-Levitt) is a former high school hockey star who is in a tragic accident that leaves him with memory loss. Years later, due to his handicap, he is working a menial job as a night-time janitor at a bank. He rooms with the much older Jeff Daniels, who is blind. One night he runs into an old classmate (Matthew Goode) who unknowingly lures him into robbing the bank.

There are enough twists and turns to keep this film from falling into typical "crime thriller" territory. Joseph Gordon-Levitt is a young actor to keep an eye on and Jeff Daniels is once again very solid. It's a small film, but worth a look.

This low-budget indie film hit a few indie festivals in 1995 and then disappeared. Many of it's young actors went on to bigger and better things.

The story, set in LA, focuses on a group of educated twentysomething slackers who kind of drift through life doing mundane jobs while worrying about their futures. The story centers on John (Rory Cochrane) a wannabe writer who ends up temping at a real estate office. His roommate (Sean Austin) is a nerd who loves painting Nazi figurines while listening to Journey. His love interest is Kyra Sedgwick who is into married men and prozac. Ron Livingston and Christian Meoli star as John's best friends. Yale graduates, they spend their days seperating credit card carbons and their nights drinking beer at the bar. It takes a tragedy to wake up John.

By no means is "Low Life" a great film but it is a pretty accurate document of twentysomething slackerdom in the 90's and surprisingly watchable considering not much happens. Rory Cochrane (best known as the stoner Slater in Dazed and Confused) never became a big star, but many of the actors in this film have had nice careers, most notably Renee Zellweger who has a funny cameo as a lesbian slam poet. Sean Astin, as Cochrane's nerdy roommate, is a scene stealer. We all knew this guy! It's more of a nostalgia piece than a great movie, and just another reminder of how much older I am getting. Hey Kyra....pass the prozac!
Page 1 of 1